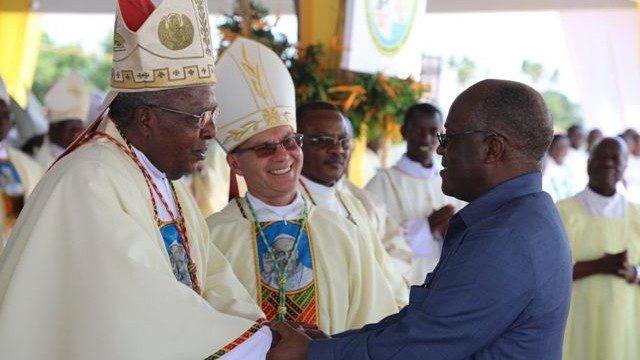 Pope Francis’s official representative at the celebrations in Tanzania, John Cardinal Njue, the Archbishop of Nairobi led the faithful in the festivities. In his homily, the Cardinal called upon various sectors of Tanzanian society to honour their various responsibilities, duties and to uphold peace in the country.

Cardinal Njue calls on Tanzanians to reflect on their faith

“This is the time to question ourselves; whether the seeds of peace preached by the first missionaries in the early days of the Church have borne fruit and been protected,” Cardinal Njue told the congregation gathered in Bagamoyo.

Speaking earlier to Vatican News’ KiSwahili Service, the Archbishop Emeritus of Arusha, Josaphat Louis Lebulu said, the next phase of the Church in Tanzania should be dedicated to investing in sustainable pastoral strategies that would more profoundly deepen the faith of Christians.

Bagamoyo: From a Port for slaves to a symbol of redemption

Archbishop Lebulu said that Bagamoyo was a very significant site in the history of Catholicism in Tanzania because it was the first place where the Holy Ghost missionaries landed.

Archbishop Lebulu aso said Bagamoyo was chosen for the Jubilee Celebrations because it was previously a place of pain and torture with many African slaves sold and exported from the port. However, with the arrival of the missionaries, Bagamoyo transformed into a place of redemption.

“We celebrate the great work done by missionaries who came to Tanzania at Bagamoyo in 1868. They installed the Holy Cross (at Bagamoyo), a Symbol of redemption from slavery, a symbol of faith to us,” Archbishop Lebulu said.

Pope says peace begins at home by saying ‘no’ to rivalry