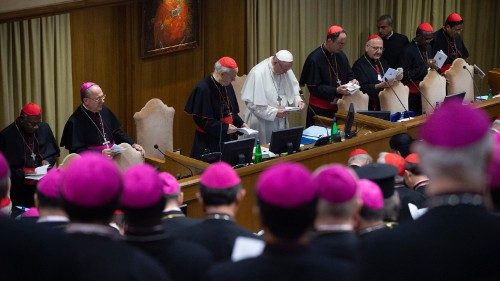 The Prefect of the Vatican Dicastery for Communications, Mr Paolo Ruffini, began today’s Synod press briefing with a report outlining numerous interventions made in the Synod’s general assembly hall. The bishops have begun working on the second part of the Instrumentum Laboris, analysing the context in which young people find themselves today.

Mr Ruffini also clarified the fact that the Chinese bishops would not be staying for the entire Synod. They had previous engagements before they were invited to the Synod.

A number of issues arose, these included accompaniment and formation, vocations, new “totalitarianisms” (things which colonise young people and take away freedom) and how to create safes spaces to assist young people discern what is good. Mr Ruffini said that in one intervention it was said that the Church cannot be reduced to a “google” God.  He said that there was an acknowledgement that the Church had failed to accompany young people in marriage and that marriage should not be reduced to a ceremony.

Cardinal Cardinal Carlos Aguiar Retes from Mexico said that in all ages those who struggle most to adapt to the social construct is young people. He said that we live in a time of societal fracture. This means that the Church must adapt in order to help young people.  The Cardinal said that the common vision of Vatican II can help us create stability and a pathway forward.

Archbishop Jean-Claude Hollerich of Luxembourg said that the world is experiencing a deep and profound change of civilisation. He said that he has contact with young people, he has young people living in the bishop’s residence, and has realised that they live differently. He said that he has learned that many young people have never read a book, instead they watch and quote Netflix. Discernment, the archbishop said, is not about black and white but discovering all the different colours and shades of reality. He said that discernment is not about opinions clashing but about greatert listening and the ability to feel and see what God wants us to do. This, he noted, is what the Synod is all about.

Cardinal Rete said that totalitarianism is always a temptation for society, especially in politics and economics. He said that numerous types of totalitarianism were referred to in the assembly. He spoke of the anonymity on the web which manipulates to generate certain ideologies.

Archbishop Hollerich said that he was concerned populism in Europe. He said that this could cause a disintegration of Europe, it is putting the continents very stability into danger. He said that politics was not directly addressed at the Synod but believes that If we focus on the marginalised then we are working to prevent the growth of populism. The Archbishop said that the Synod is a good antidote to populism.

Briana Regina Santiago, a lay auditor from the United States of America, told the press that young people have spoken and been called on for comment much more than they expected in the group discussions. She said that she is unable to express in words how beautiful it has been to participate in the Synod.  She said that she had not heard of one young person having a negative experience. There has been open dialogue, it has been eye-opening and enriching and a good inter-generational conversation, she said.