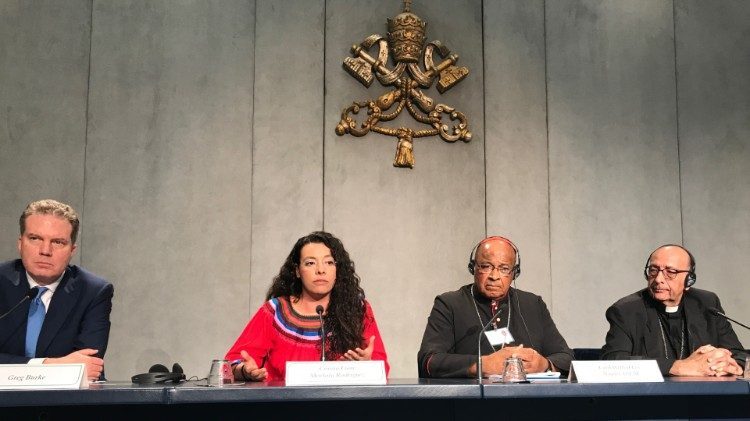 Ms. Corina Fiore Mortola Rodríguez from Mexico said that she wants to convey that she, and the young people at the Synod, are very grateful to Pope Francis for giving them this opportunity to be at the Synod and for the chance to speak. She said that the presence of young people has been fruitful and everyone is working together. She explained how, in a coffee break, she had a conversation with Pope Francis who told her that young people must “shake up the Church”. She says that the Holy Father told young to speak their minds.

Ms. Rodríguez said that young people want a Church that does not give up in the face of adversity – when confronted with migration, violence and abuse of all kinds. Young people want the church to be the trending place of charity. She told journalists that she felt very emotional but wanted to say how touched the young people were when the Synod Fathers humbled themselves and apologised for what has happened in the Church that should never have happened.

She said that young people don’t want to be directed, they want to be accompanied. Young people move away from the Church because an encounter is missing, they don’t encounter people who love what they are doing. If you love what you do, it is conveyed to others by the way you live, she said. With great enthusiasm she said that young people, like her, want to share the energy they have for their faith like a hurricane – one that brings something good.

Cardinal Juan José Omella Omella of Spain added that the Church preaches a lot and says religion is positive and that we must love God. He said that although this is done, young people claim that we do not practice what we preach. He went on to propose Pope Francis as a model saying that he does the things he speaks about, he is earnest and consistent. The Cardinal said that Pope Francis got rid of excess and that the Church must do that too.

African issues are left out

Another thing he highlighted was the scourge of unemployment, poverty and migration. He said these issues were touched on but mostly in the European context rather than Africa. The Cardinal said that there is uncontrolled exploitation in Africa, the extraction, for example, of minerals and the environment which is degraded as a result. He said that this leaves Africans with no other means of survival but to leave the continent.

He also mentioned how some families remove their children from school and put them into situations of child labour so that the can make ends meet. This means that children are not getting an education, and so the cycle of poverty continues.  The Cardinal mentioned bribery and corruption in governments which have a massive impact on the wellbeing of African youth.

The Pope is always respectful

Cardinal Juan José Omella Omella said that the Holy Father is always with the Synod in the gathering of the general assembly. He says he listens and takes notes and clearly shows the gathering that what they are doing is something important and significant. He says Pope Francis is always respectful, he knows how to listen and he knows when to speak. The Cardinal said that the Holy father spoke once, he summarised what had been said and made an important input himself. He said that when people speak the Holy Father looks at them, gives them attention, no matter who they are – young people, curial officials, bishops, auditors and members of other churches who are observing the Synod.

The prelate said that the Holy Father asked everyone at the beginning of the Synod to speak freely. The assembly heard things that some people didn’t like, he admits, but the important thing is that everybody is free to speak what is in their hearts. “I believe that there is a free climate and that is beautiful,” the Cardinal Omella Omella said.

Cardinal Napier said that he believed that the critique of Pope Francis was often unbalanced and that there are many things which Pope Francis has done that are not often spoken of. He mentioned how, in the Council for the Economy, there are now budgets and accountability which, he said, was not the case in the past.

Archbishop Romero, martyr, to be made saint at Vatican ceremony Oct. 14

Sainting Romero and Paul VI, Francis says: no ‘half measures’ to holiness