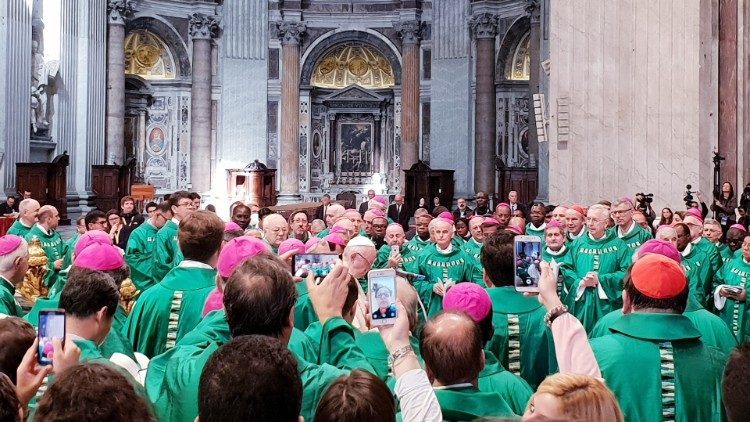 Both Cardinal Christoph Schönborn of Austria and Archbishop Eamon Martin of Ireland said that the Synod has been a time of grace – despite their personal apprehension before it started.

Cardinal Schönborn said that when appointed he was concerned about being away from Vienna for such a long time. Now, he says, he realises what a good experience it was for bishops to come from all over the world so that they could listen to young people and share with them. He said that they heard more about the experiences and life situations of youth. He said that here is no other comparable social body of leaders in the world who will take the time – a whole month – to listen to young people with empathy and true attention. He said that the atmosphere was not one in which the bishops had answers but simply one in which they gave attention to the vison and dreams of young people. He said that at the Synod they laughed a lot and that there was an excellent atmosphere and real communion. He said that he will be more determined in his missionary spirit because the courage and willingness of young people.

Archbishop Anthony Muheria from Kenya said that the Synod was an exceptional experience of the universality of the church, its diversity and also of collegiality. He says that the Synod has been like a flame, a fire, which reignited the desire of the bishops to engage young people and in so doing give new life to the Church.

The Church must preach a counter-cultural message

Archbishop Martin said that this Synod was not talking about a particular doctrinal issue. The Synod touched on many issues from the point of view of young people. In the first week the gathering identified the pressures that young people were under. The reality of poverty, human trafficking, migration, how many young people are lost, the increase in depression, mental illness and their yearning for a stable reference point. The Archbishop said that the bishops felt the importance again of the Church presenting a counter-culture message to the world, a world, he added, in which young people are drowning and feel suffocated. He said that the Church gives people a reason to hope, to hold on to life, to live with passion. If anything, he said, the Church mustn’t chase after fashions but fearlessly speak and go against the grain of what society proposes. We need a Church that is counter-cultural, he said.

Archbishop Muheria said that the challenge is now for the bishops to pass the flame of the Synod on to young people. We need to instill hope. He said for him it is now about what will happen when the Synod ends on Sunday. He said that the Church needs to help young people face hurdles so that they can have great dreams for the future – great dreams which are calling the whole Church forward, he added. He said this will mean a change in approach and therefore a new adventure. He said that the majority of Catholic youth are in Asia and Africa and the Synod must connect with them despite their particular challenges.

Archbishop Martin said that he is nervous as he has to go home and bring the power and joy and life of the Synod back to the particular Churches in Ireland. “I have to be an ambassador of the Synod,” he said.

He said that young people have to be involved in the contemporary Church. In society they are in politics, education, policing, government and the legal system. For this reason, too, he said, the Church must engage with them so that they can transform society from within the places they are already working and involved.

Mr Erduin Alberto Ortega Leal from Cuba, said that the Church does try and help young people find answers but that the Church of the future must also be involved and active with all people. He said that sometimes people in the Church don’t understand the mistakes of the past but, thanks to the Synod, he feels that there is a better understanding now.