Synod: Ecumenical Prayer Vigil will emphasize ‘unity of the Church’ 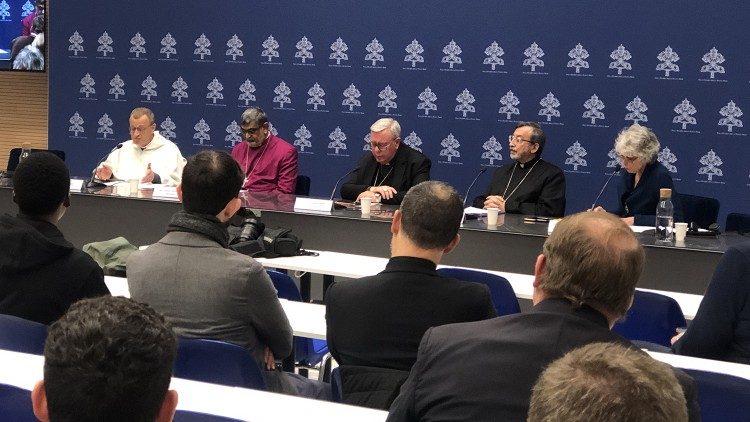 Synod officials and ecumenical representatives from various Churches and ecclesial communities offer details of the Ecumenical Prayer Vigil that will precede the 16th General Assembly of the Synod of Bishops in October.

When Pope Francis announced that the upcoming General Assembly of the Synod of Bishops would be preceded by an Ecumenical Prayer Vigil, he emphasized that “the path to Christian unity and the path of synodal conversion of the Church are linked.”

That sentiment was echoed on Monday by Cardinal Hollerich, the General Relator of the Synod, at a press conference providing details of the event, set to take place in St Peter’s Square on Saturday, 30 September.

“The journey of synodality undertaken by the Catholic Church is and must be ecumenical, just as the ecumenical journey is synodal,” he said.

Cardinal Hollerich noted that the synodal process is founded on the grace of Baptism, which is shared not only by Catholics but by all Christians. “I feel that we need them,” he said, adding immediately, “We need you. We need you in order to be really on the path of conversion.”

Moments to pause on the synodal journey

Christians from all denominations are invited to take part in the event, which was inspired by Brother Alois, the prior of the Taizé community at the opening of the Synod on Synodality in October 2021. Addressing participants in the Synod, Brother Alois said:

“It seems to me desirable that there should be on the synodal journey moments to breathe, like halts, to celebrate the unity already achieved in Christ and to make this visible. (…) Would it be possible that one day, in the course of the synodal process, not only delegates but the people of God, not only Catholics but believers from the various Churches to be invited to a large ecumenical gathering?”

Gathering the People of God

The Taizé community took up the call, organizing an initiative entitled “Together – Gathering of the People of God,” which will offer young people – aged 18-35 – the opportunity to engage in the synodal process, with the aim of demonstrating “the desire to increase the visible unity of ‘journeying’ Christians.”

The Ecumenical Prayer Vigil will be at the heart of the weekend and will see the participation not only of Pope Francis, but also representatives of various Christian Churches and ecclesial communities.

Speaking at Monday’s press conference, Brother Alois explained that the Vigil, open not only to young people but to all Christians, will include Scripture readings, prayers of praise and intercession, Taizé songs, and moments of silence.

“We hope that this Vigil will be a sign of fellowship, unity, and peace.”

Representatives from other Christian communities were also present for the meeting with journalists.

Archbishop Ian Ernest, the personal representative of the Archbishop of Canterbury to the Holy See, noted his appreciation for the Synod’s efforts to bring together all of the People of God, following on the ‘vision’ articulated by the Second Vatican Council.

The representative of the Armenian Apostolic Church to the Holy See, Archbishop Khajag Barsamian, highlighted the importance of sincerity and humility in a listening Church.

Pastor Christian Krieger, the President of the Conference of European Churches and the French Protestant Federation, pointed to the “performative character” of the Synod, noting that “it is capable of transforming us.”

Listening to the Spirit

At the conclusion of Monday’s press conference, Cardinal Hollerich once again took the floor, in order to announce another unprecedented synodal initiative of Pope Francis: following the Ecumenical Prayer Vigil, the bishops and other participants in the General Assembly will retire for a three-day retreat on the outskirts of Rome in preparation for their deliberations.

“So,” he said, “we start with prayer, with listening to the Spirit.”

Cardinal Hollerich explained that the retreat will take place from Sunday, 1 October, through Tuesday, 3 October, and will be led by Dominican Father Timothy Radcliffe, at the invitation of Pope Francis.

Pope: Never forget our brothers and sisters with Hansen’s disease