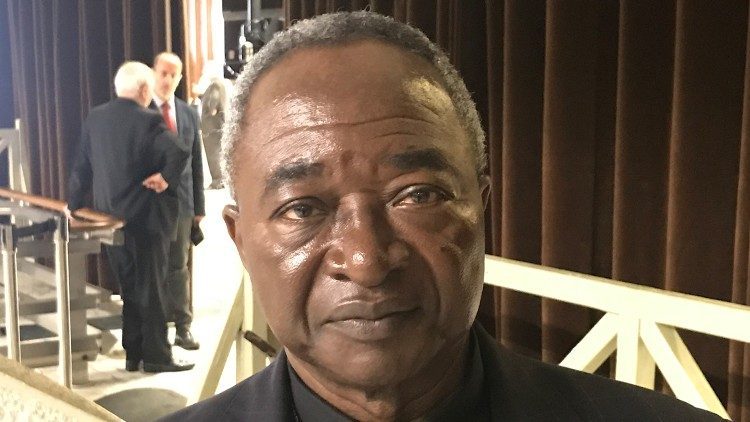 Jesuit Archbishop Joseph Atanga shepherds the Archdiocese of Bertoua in the eastern region of the African country of Cameroon. The Archbishop spoke to me about some of the problems he believes afflict African youth. He says that African youth need, first and foremost, to be helped to “come to Jesus”. He says that he is also hoping that the Synod of Bishops will be able to facilitate a closer relationship between the West and the African Church.

The Synod has been good, it is important for the Church to come together and share different experiences from across the world. He said that the bishops of Africa are also happy to be able to present the situation that the youth in Africa find themselves in today.

The Archbishop said that the Synod has shown how youth all over the world have the same problems, even though the problems of African youth differ. He said that it is important that youth from all over the globe come together and share their experiences too.

He believes that the issues African youth face are distinctive and there are different ways of facing the issues. It is important for African bishops to listen to the youth, he says, so that the can accompany them and help them face their issues and problems.

Archbishop Atanga believes that African youth are at a crossroads; he says that they don’t know how to find their way to Jesus. The bishops of Africa have to learn how best to accompany them to Jesus.

Corruption, extreme poverty and political upheaval are important issues for Africa which, the Archbishops says, are not being addressed properly at the Synod. He says that there is corruption all over the world, not just in Africa. Corruption, he believes, leads to extreme poverty. He says that multinationals exploit the resources of the African continent and then take money off the continent.

The Archbishop says that Africans are migrating and that often this is driven by poverty. He says that they are migrating both off the continent and inside African countries themselves. This, he says, is another big issue that needs to be closely examined.

He hopes that the Church in the west will help the African Church. He says that dialogue is important in finding ways for the Church in the west to support the African Church. The Archbishop says that the Holy Father talks about corruption and that the bishops cannot let him talk about that alone; all the bishops need to address this issue so that they can find a way forward together.

At the end of the Synod the Archbishop hopes to take away a sense of the issues that face the universal Church. He says that many of the problems are the same and that the Church needs to find ways of meeting those problems and walking together so as to be a listening universal Church.