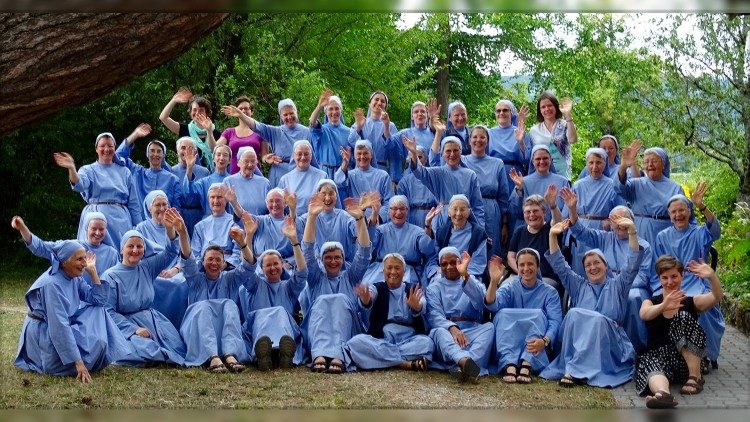 The Week of Prayer for Christian Unity kicks off on Monday 18 January and foresees daily meditations, prayers and events, concluding with celebration of Vespers presided over by Pope Francis and other Christian leaders on 25 January at the Basilica of St. Paul’s Outside the Walls.

The community of Grandchamp in Switzerland is a monastic community that brings together sisters from different churches and countries.

It is this community that has provided the theme for this year’s “Week of Prayer for Christian Unity,” and that offers the daily reflections and texts that aim to nurture closer communion with one’s brothers and sisters in Christ and greater solidarity with the whole of creation.

“Abide in my love and you shall bear much fruit” (John 15: 5-9) is the theme the sisters chose, allowing them to share the experience and wisdom of their contemplative life abiding in the love of God, and giving them a voice with which to speak about the fruit of this prayer.

The community of Grandchamp

The community of Grandchamp, which brings together sisters from different churches and countries, was formed in the first half of the 20th century and from the start had close ties with both the Community of Taizé and Abbé Paul Couturier, a seminal figure in the history of the Week of Prayer for Christian Unity. Today there are about fifty sisters in the community, committed to seeking the path of reconciliation between Christians, across the human family, and with respect to the whole of creation.

In an interview with Vatican Radio, Sister Anne-Emmanuelle, Prioress of the community, says the unity the sisters pray for is reflected in the daily life of the community, and not only “at a liturgical or dogmatic level.”

Texts based on experience and wisdom of contemplative life

Each sister, Sister Anne Emmanuelle explains, has to leave the specificities of her Church to enter into the dimension of the community of Grandchamp, and she noted that this journey invariably evokes all the richness of the universal Church that emerges from this unity.

“We all humbly advance on the path of Christ’s love,” and so must work to fulfil this verse of St. John, the theme of this year’s celebration, she says, explaining that it is “a difficult verse, because there are inner struggles pulling us apart.”

But reiterating the sisters’ commitment and inviting all believers to “set out on this journey,” Sister Anne-Emmanuelle said the meditations have been prepared in a spirit of reconciliation among Christians, based on the experience and wisdom of the sisters’ contemplative life.

After having discerned the theme for this year’s “Week of Prayer for Christian Unity” the community of Grandchamp prepared working drafts of the background and worship materials. These documents were subsequently finalized during an international group meeting sponsored by the Pontifical Council for Promoting Christian Unity and the International Committee of the Faith and Order Commission.

The traditional period in the northern hemisphere for the Week of Prayer for Christian Unity is January 18-25. Those dates were proposed by Servant of God, Fr. Paul Wattson, SA, founder of the Society of the Atonement, who initiated observance of the first “Church Unity Octave” in 1908, to cover the original days of the feasts of the Chair of St. Peter on 18 January and the Conversion of St. Paul on 25 January, and therefore have a symbolic significance.