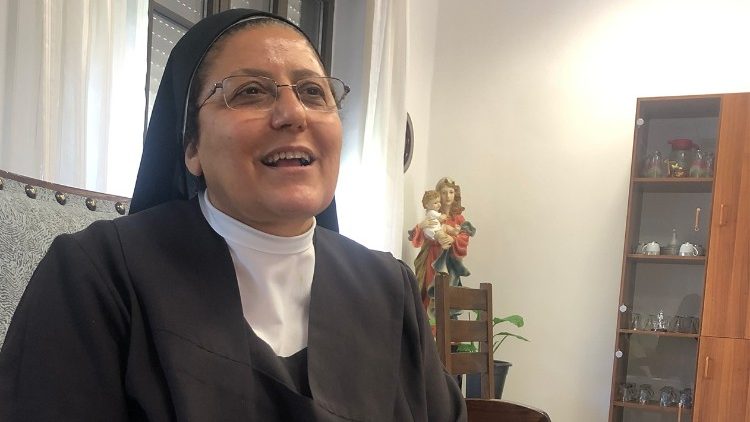 Ibtisam Habib Gorgis, a Franciscan Missionary Sister of the Immaculate Heart of Mary, born in Qaraqosh, Iraq, recounts her vocation and the impact of Pope Francis’ Apostolic Visit in 2021.

Ibtisam Habib Gorgis is an Iraqi nun who belongs to the Congregation of the Franciscan Missionary Sisters of the Immaculate Heart of Mary. We meet her in Jerusalem, where she is staying for a short period to do spiritual exercises.

She has a contagious smile, flowing speech, and a face that radiates serenity and inner peace, in spite of the atrocities that the war in her country has forced her to witness.

“I was born and raised in Qaraqosh”, an Assyrian town in northern Iraq, which is only 30 km from Mosul, and close to the ruins of the ancient city of Nineveh. The dialect spoken there is a derivation of Aramaic.

“We speak Jesus’ language”, she says proudly, but she also speaks fluent and correct Italian, which she learned during her novitiate years. Qaraqosh is a small Christian enclave in northern Iraq, of both Assyrian and Chaldean tradition, but, she says, “we have always lived in peace and mutual respect with our Muslim neighbours”.

Q: How is it that an Iraqi girl decides to become a nun?

In truth, I had never thought about it, because although I live in a patriarchal and traditional environment, I have always been very independent. I am very jealous of my freedom. Even now (she laughs) that I wear this veil.

Q: So how did it happen?

I was attending the Catholic group of university students, where I was studying biology. At that time, I must say, we did not live badly: after the first Gulf War, we were isolated from the world, we did not understand what was happening outside our borders, but we lived in peace.

Tāreq ‘Azīz, the Foreign Minister — who was actually Prime Minister — was a Chaldean Christian and came from Tel Keppe, which is very close to Qaraqosh. There was one thing I really liked about my involvement among young Catholics: helping the poor. I found pleasure in doing good. It was not an egocentric gratification; rather, it gave me an inner peace, it gave me back the truest sense of humanity: living with others and for others.

But I still couldn’t find a place where I could fully fulfil myself. A Franciscan friar came to visit us. I was deeply impressed; I read the life of Saint Francis and a small light lit up in my heart. Then two Italian nuns came and invited me to visit their convent in Jordan. By then, I was at what we call the age of marriage, but… but I wanted to be free. When my family sensed that I was looking elsewhere, they were not happy.

“This is my daughter, not yours”, my father said to the nuns at the doorstep, preventing them from entering. Eventually, after much insistence, he gave in and let me leave for Jordan. My uncle accompanied me on the journey, which lasted 18 hours because of the embargo our country was under.

Entry (into the Congregation) was not easy; I didn’t understand the language very well, I had to learn Italian, the nuns followed the Syriac rite and not the Latin one, so I didn’t understand anything at Mass, Lauds or Vespers, and above all, it was a lifestyle I did not know.

The point of no return, which may seem silly, was when they cut my hair; a real break with my previous life. But despite all the difficulties to overcome, I felt a growing inner peace. Changes in life usually create restlessness, anxiety; but this change, although so radical, on the other hand aroused such peace in me.

We were four girls from Qaraqosh, and that was a comfort to me; there was someone I could at least talk to and be understood. After nine months, they allowed me to go home and see my parents, and then they sent me to Italy to do my novitiate.

Q: Did you go back to the Middle East after?

Yes. First, I was sent to the Holy Land, to Bethlehem and Nazareth, and then to Baghdad, where for three years I worked on the educational front.

All until that terrible 6 August 2014. I was in my hometown. Daesh (so-called Islamic State) had entered the Nineveh region. There was no more water or light in the houses. Then we heard an explosion. A house on the outskirts had been hit by a missile. We rushed there and found only rubble and corpses. After the dead were buried, the great flight began.

Fifty thousand people, without religious or political distinction, left their homes and the city. The horror stories coming to us from the areas already occupied by Daesh left no other option but to flee. Upon entering Qaraqosh, Daesh should have found no one. We used all means to help as many people as possible escape. From the entire Nineveh region 120,000 people headed towards Kurdistan.

We sisters stayed until the end, partly to help the displaced people and partly because we did not know where to go. We slept on the streets so as to be ready to flee. Then the Bishop ordered us to leave. We were the last to leave Qaraqosh. We left around 2 o’clock at night, and by 5 a.m., the first Daesh troops occupied the city. When the militiamen entered a town, they gave three options: either you become Muslim, or you pay us, or we kill you. Almost every family has a dead person to mourn. A quarter of the houses were burnt down, all ransacked and the churches destroyed.

We worked with the whole Catholic Church to help the displaced people, who lived for months under tents or in makeshift dwellings. Then we were sent back to the Holy Land, crossing the Jordanian border. It was a night that lasted more than two years. Qaraqosh was liberated on 19 October 2016, with the battle of Mosul. After that date, some of the inhabitants began to return. But many, especially those who had found refuge abroad, never returned. Today the situation is still painful, reconstruction is slow, there is no work, there is so much poverty.

Q: And what are you doing today, Sister Ibtisam?

Today I am back in my country. Together with two sisters, I run a kindergarten with over 500 children.

Pope Francis’ visit last year was a fundamental step in our experience. He gave us a breath of fresh air; for the first time in years, we felt that there is someone who really cares about us, someone who loves us. He made us feel that we are a precious value to the Church. We are alive and we have faith.

He made us feel proud to be near those who practice other religions, with the Muslims who had also fled like us from the atrocities of Daesh. It was only when we saw and touched Pope Francis in this land, here beside us, that we realised it was over. It was truly over, and now we can turn the page.

Pope Francis did not merely “visit”; he restored us to life.