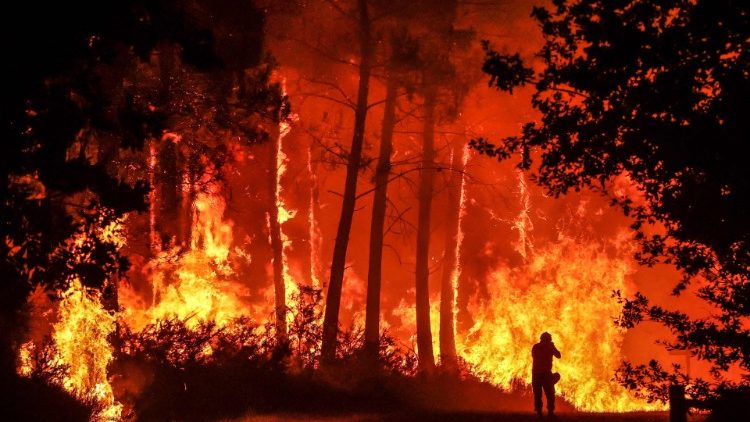 France has become the latest European nation to appeal for international help to respond to a massive southwestern wildfire that officials say has already destroyed nearly 7,000 hectares or 17,300 acres of forest. The French president, Emmanuel Macron, said several nations are already assisting France to help contain raging fires. The blaze comes as Europe struggles with deadly wildfires triggered by record temperatures and droughts across the continent that authorities say killed at least 1,000

More than 1,000 firefighters are battling what has been called a “monster” wildfire near the city of Bordeaux. As a result, some areas in the region now look like a war zone.

Authorities say the blaze has destroyed several homes and forced 10,000 residents to flee. Thousands of hectares of forests have been
destroyed as firefighters struggle to get the spreading flames under control.

The massive wildfire in France’s Gironde region has been raging for two days around the commune of Landiras, about 30 kilometers or 19 miles
south-east of Bordeaux.

French firefighters have had to be urgently redeployed from other regions to boost the ongoing operation. They are being backed by specialist aircraft that have been dropping water and flame retardant.

Amid the misery, French President Macron said he was pleased that Austria, Germany, Greece, Poland, and Romania “are coming to aid” France in battling the blaze. In a message on social media, Macron called it “European solidarity at work!”

But despite their and international efforts, the blaze was still out of control on Thursday.

This summer France and several European countries have seen a wave of deadly wildfires triggered by record temperatures and droughts across the continent. Wildfires also rage in Greece, Spain, and Italy as heatwave moves across Europe.

More than 1,000 deaths have been attributed to the heat in Portugal and Spain alone. But across Europe, that death toll is believed to be even higher.

In Britain, an extreme heat warning has come into force, with temperatures forecast to hit 37 Celsius or 99 Fahrenheit in some areas over the next four days, unusually high temperatures for the island nation.

There is discussion among experts about what caused the latest heat and wildfires.

While several scientists link them to climate change, other experts say it is still hard to pick one reason for this year’s trend for the whole of Europe.