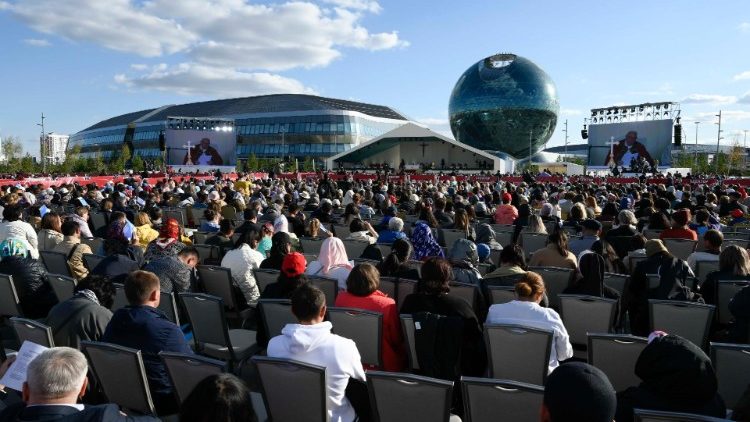 On the occasion of Pope Francis’ 3-day Apostolic Journey to Kazakhstan, the Archdiocese of the Mother of God in Moscow has organized a special pilgrimage to the Central Asian nation running from 12-15 September. The Auxiliary Bishop of Moscow explains the importance of their participation and of the Pope’s visit to the region for Russian Catholics at this difficult time.

Among the thousands of Catholic faithful attending the Holy Mass presided over by Pope Francis at the “EXPO Grounds” in Nur-Sultan on Wednesday, there was also a small representation of pilgrims from Russia.

The pilgrimage is organized by the Archdiocese of the Mother of God in Moscow under the motto “We are witnesses of unity”, to express the closeness and support of the Catholic Church in Russia to the Pope as he brings his message of peace and fraternity to neighbouring Kazakhstan in these difficult times for the region and the entire world.

The group, which departed from Moscow on 12 September, arrived in the Kazakh capital on Wedneday, after stopping in the Siberian city of Omsk, in Karaganda, Kazakhstan, and visiting Karlag, one of the largest Soviet gulags. It was in Karlag, between 1930 and 1960, that tens of thousands of inmates, including Russian Christians, lost their lives.

Leading the pilgrimage is Bishop Nikolai Dubinin, Auxiliary Bishop of the Archdiocese of Moscow, who on Tuesday presided over a Remembrance Mass at Karlag for those who died there during the Soviet persecutions.

In an interview with Vatican News ahead of the event, he explained how important it is for these Russian pilgrims to visit Kazakhstan and meet the Holy Father on this special occasion.

“We have been praying for the Pope to visit to Russia for many years, and as Catholics we are still waiting for this visit to happen. Unfortunately, such a visit is not yet possible, but we haven’t lost hope,” said Bishop Dubinin.

“A visit to a neighbouring country which is a former Soviet Republic and where the local Catholic Church shared the same fate [as the Church in Russia] in difficult times, is of a special meaning to us.”

Although only a small number of faithful from Russia have been able to join the pilgrimage, the Bishop said that many Catholics across the country are joining spiritually Pope Francis in his Apostolic Journey to the Central Asian nation, especially during Wednesday’s celebration of the Eucharist on the Feast of the Exaltation of the Holy Cross.

“Light and hope” for peace

The importance of the participation of the albeit small Russian Catholic group in the event has also been highlighted by Fr. Janez Sever, a Slovenian American Jesuit who works as director of a cultural center and a formation coordinator in Novosibirsk, in Siberia.

Speaking to Vatican News’ Antonella Palermo, the priest said Pope Francis’ presence in Kazakhstan in these “mad times” of war in Ukraine, but also in many other parts of the world, brings “light and hope” for peace also to Russian Catholics.

The “thirst for world peace”, and the key role of religions in building harmony and fraternity between peoples, have been the focus of Pope Francis’s first two public speeches in Nur-Sultan in which he has upheld the Kazakhstan as an example of peaceful coexistence between peoples of different faiths, cultures and nationalities.

In his homily during the Mass at the EXPO Grounds, the Pope further underscored that “peace is never achieved once for all,” and insisted that “commitment is demanded on the part of all if Kazakhstan is to keep growing in fraternity, dialogue, and understanding.”

Referring specifically to the ongoing conflict in Ukraine, as well as in other areas of the world, Pope Francis prayed again that we never grow accustomed to war, or resign to its perceived inevitability.

Holy See and the Republic of Kazakhstan strengthen collaboration