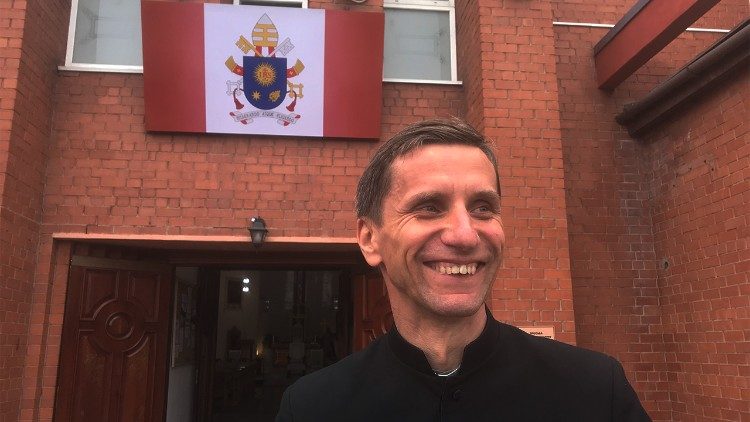 Fr Anthony Corcoran, SJ, the Apostolic Administrator of Kyrgyzstan, describes the excitement of the Holy Father’s visit to neighbouring Kazakhstan, and recalls the Pope’s important words of encouragement to the small Catholic minorities in the Central Asian countries.

Fr Anthony Corcoran, SJ, the Apostolic Administrator in Kyrgyzstan, is in neighbouring Kazakhstan for Pope Francis’ Apostolic Journey to the Central Asian nation.

In an interview with Antonella Palermo, Fr Corcoran noted that the Pope being in Kazakhstan is “such a great moment of joy, of gathering, of praying together, and also of being able to be together with Catholics from other places in Central Asia.”

He pointed out that Catholics are a tiny percentage in all the central Asian countries, adding that his country, Kyrgyzstan, has an ever smaller percentage of Catholics than Kazakhstan.

Even the largest tree…

Fr Corcoran went on to recall his ad limina visit to the Vatican three years ago, in which the Holy Father reminded him and his brother bishops of two things.

“One, that we are small, and God loves to work in the very small.” And, secondly, he called them a “germoglio“, which in Italian means seedling.

“When we later reflected on this as a Conference of Bishops, it was a beautiful reflection that still bears fruit today, because ‘even the biggest shadiest tree was once a seedling,” explained Fr Corcoran.

So, for the Catholics of Central Asia, he continued, “having the shepherd come to us to provide support, encouragement, and consolation from God through events and people has a great meaning. This is such an important time for a witness of reconciliation of the fact that we live together.”

Fr Corcoran then recalled Pope Benedict XVI’s journey to the United Kingdom in 2010, in which he said that although we have many differences, “as humans, we are all searching for the meaning of life.”

This, said Fr Corcoran, “is the key question we have as religions, so being together not just in theory but physically, which the Church is now.”

He concluded by noting that, in Kyrgyzstan, the vast majority of the population is Muslim, meaning their neighbors and the people they serve are often Muslims. The fact that even the Holy Father has come to be in harmony with them, said the Jesuit priest, “can encourage us all to and show us what this means, and we can do the same.”