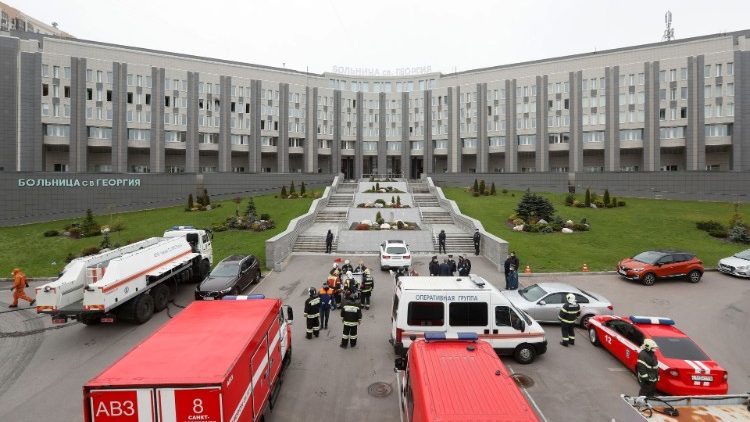 Russia is mourning the death of at least five Covid-19 patients who died early Tuesday when a fire broke out in a hospital in St. Petersburg..

Firefighters and authorities were inspecting the scene of a fire that struck St. George Hospital in St. Petersburg, Russia’s second-largest city.

Emergency officials said that a least a handful of coronavirus patients who were on ventilators died after the blaze broke out in an intensive care unit.

The fire was put out within half an hour. Russian media have quoted sources as saying that a faulty ventilator could have caused the blaze.

Police in St. Petersburg launched a criminal investigation into the fire.

But it wasn’t the first deadly blaze in a coronavirus hospital in Russia. On Saturday, a fire in the Spasokukotsky Hospital in Moscow, the capital, killed one patient.

Separately, at least nine people died in a fire at a nursing home on Moscow’s outskirts late Sunday. The authorities in Krasnogorsk on Moscow’s northwestern edge said the fire broke out in a private facility for the elderly. A short circuit was blamed for that blaze.

These latest incidents underscore broader concerns about the situation in neglected hospitals and other care homes in Russia as the country faces an uphill battle to halt the coronavirus outbreak.

“Starting from May 12, the national period of non-working days are over. In all of the country and for all sectors of the economy,” ” he told the nation in televised remarks.

But President Putin warned: “The fight against the epidemic is not over. The danger remains.”

Russia has reported more than 232,000 confirmed coronavirus cases and over 2,000 deaths. Critics say those numbers significantly undercount the real toll of the outbreak in Russia, a country of some 142-million people.