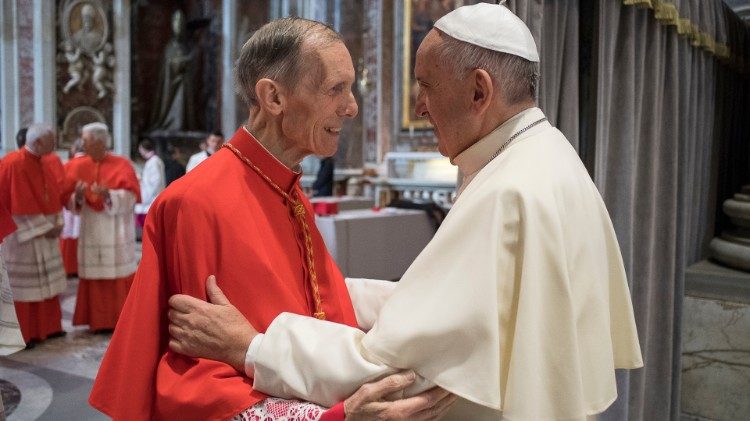 Pope Francis expresses his condolences upon the death of Cardinal Renato Corti, the Bishop emeritus of the Diocese of Novara, who died on Tuesday at the age of 84.

Pope Francis on Tuesday sent a telegram expressing his condolences on the death of Cardinal Renato Corti, the Bishop emeritus of the Italian diocese of Novara.

In his message, the Holy Father remembered the Cardinal as one “who served the Lord Jesus and the Church with exemplary dedication and delicacy of spirit.”

The Pope noted “with gratitude” the “intense spiritual and pastoral ministry” of Cardinal Corti, beginning with his ministry in his native archdiocese of Milan, and later “as a meek and wise pastor” of the church of Novara.

“I also think of his genuine love for the mission and the ministry of preaching, which he exercised with great generosity, in all things animated by a passionate desire to communicate the Gospel of Christ”, Pope Francis said.

Originally from Galbiato, in Italy, Corti began his sacerdotal ministry when he was ordained to the priesthood by Cardinal Giovanni Battista Montini, who later became Pope Paul VI.

Renato Corti was a disciple of Cardinal Carlo Martini, and served as his Vicar General in Milan. He was ordained to the episcopate by Martini in 1981, choosing as his episcopal motto “Cor ad cor loquitur” (“Heart speaks to heart”), the motto of St John Henry Newman.

In 1990 he was named Bishop of Novara, the See he occupied for 21 years. During that time, he promoted the cause of Antonio Rosmini.

As a bishop, Renato Corti served as vice president of the Italian Bishops’ Conference (CEI) from 2005-2015. An esteemed preacher, he was chosen to guide the spiritual exercises of the Roman Curia during Lent in 2005 – the final Lenten meditations with Pope St John Paul II.

In 2015, Corti was invited by Pope Francis to compose the meditations for the Via Crucis at the Colosseum on Good Friday. Shortly thereafter, in the Consistory of 2016, he was created a Cardinal by Pope Francis.

Upon turning 75, Corti submitted his resignation as Bishop of Novara. From February 2012 he made his home at the sanctuary of Rho, with the Oblates of Saints Charles and Ambrose.

A magisterium for peace and against hypocrisy