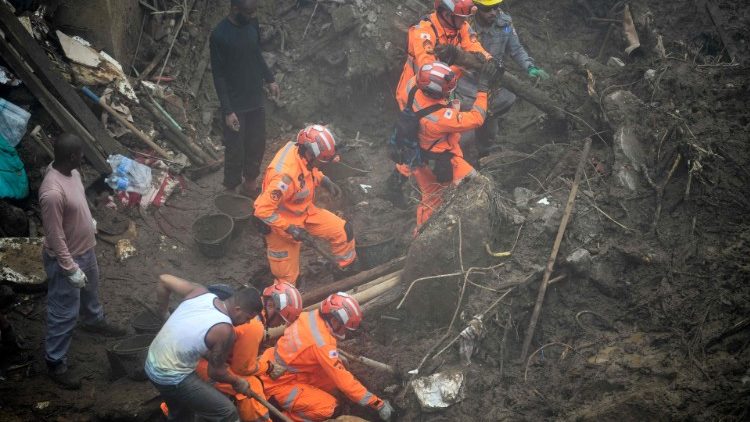 Heavy rain storms have led to flooding and landslides in the area of Petropolis in Brazil, with more than 100 people reported killed.

The rescue operation continues in the stricken city of Petropolis, parts of which were enveloped by landslides. The death toll stands at more than one hundred with scores more still missing.

Rescue teams are digging with spades, using chainsaws to fragment debris, accompanied by sniffer dogs, whose sense of scent and hearing is more acute than the human range. The city of Petropolis which is named after a Roman Emperor is located 64 miles from the City of Rio de Janeiro. Brazil`s President Jair Bolsanaro flew there following the disaster and described enormous devastation. His Holiness Pope Francis is praying for those struck and afflicted by natural disasters, which this World is increasingly suffering.

Experts say climate change over the decades has triggered greater rainfall and this has affected the land, making it heavier. soggier and more unstable.

Poverty often equals desperation and people have built in areas that are not suitable because they have nowhere else to go.

The blame game has already started. Reports are emerging that the Rio State Government spent less than half its allocation of funds for disaster prevention. The State has retaliated by saying the city failed to respond to urgent requests as to how many people had been relocated into different areas. The lunar landscape is an awful testament to a changing climate in an unstable area. Tragedy has ensued.