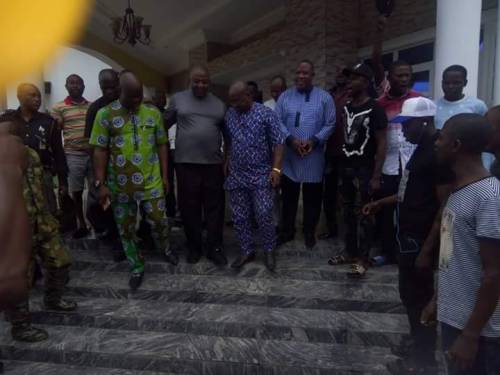 The constituents said the call became necessary when on Saturday, Ogor was seen supported by the Delta State Commissioner for Housing, Joseph Ogeh, and the Isoko North local government chairman, Emmanuel Egbabor to walk down a staircase when the federal lawmaker, who is seeking re-election for the fifth time, paid a consultation visit to the commissioner in his country home at Otor-Iyede.

According to the constituents, following the current health predicament of the federal lawmaker, it will be impossible for the constituency to enjoy robust representation in the green chamber, which they have suffered in the past one year due to the absence of the lawmaker at plenary sessions in the house.

A constituent from the lawmaker’s home town, Ozoro, who simply identified himself as Oghenekaro, told SaharaReporters of what Ogor was being subjected to since he returned from his treatment in China, “all in the name of consultations for his re-election into the green chamber”.

“Leaders, youth, and even the elders in Isoko nation have advised him to leave politics and take very good care of his health,” he said.

A chieftain of the Peoples Democratic Party (PDP) in Isoko South, who had earlier received the lawmaker on a consultation visit in his home, confided in SaharaReporters that Ogor must be advised to leave politics now to enable him attend to his health.

“You will weep for Rt. Hon. Leo Ogor, when you see him entering his SUV. His left hand and the left leg are the areas worst hit by the stroke. Even his speeches too, there are still some challenges. His handlers are not helping the man too. But, with the many calls on him to leave politics and focus on his health, I doubt if the people will vote him again.”

Isoko indigenes have continued to appeal to Ogor, even on social media platforms, to forget about his re-election and take his health seriously, having served for sixteen years in the National Assembly.

Peace Ogor, Leo’s wife, was said to be unhappy over “unnecessary pressure by selfish politicians” on her husband, who has been battling stroke for some time now, to join the 2019 contest.

In June 2017, Ogor had left Nigeria for treatment in Switzerland after suffering partial stroke, and returned to Nigeria in January 2018 after several months of absence from the lower chamber.

The PDP lawmaker, who just returned from China a few weeks ago, where he was said to have gone for another round of treatment, has been said to be releasing millions of Naira to leaders of his party and delegates for the party’s primaries, and has also been embarking on consultation visits to party elders to support his election bid for the fifth time.

Meanwhile, a media aide to Governor Ifeanyi Okowa on Social Media, Nelson Egware, has castigated people calling on the sick lawmaker to quit politics and focus more on his heath.

Describing the lawmaker as the “Roosevelt” of Isoko, Egware said: “Franklin Roosevelt was the only President of the United States of America, who served for four terms from his wheelchair. His wheelchair didn’t diminish the capacity in him”.

The federal lawmaker has a pending corruption-related issue with the Economic and Financial Crimes Commission (EFCC) on 20 constituency projects, which were tagged as “suspiciously unexecuted”.