Pope’s message to Jesuits during visit to Baltic States 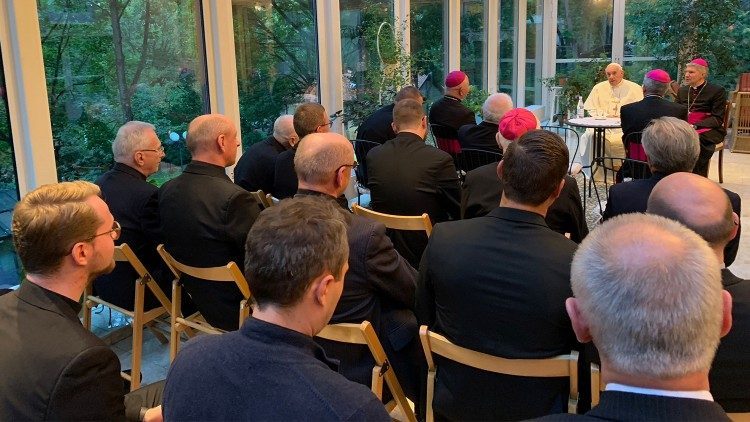 The hour-long meeting with a group of 28 Jesuits from several different countries took place on 23 September while Pope Francis was in Vilnius. A transcript of the conversation was published in the most recent edition of La Civiltà Cattolica by the magazine’s Editor-in-Chief, Fr Antonio Spadaro SJ, who was present at the meeting.

Change in the Church

One of the points touched on by Pope Francis during the conversation, was the importance of “the encounter between young and old”. When a young Jesuit asked the Pope how he could help him, Pope Francis replied that today we need to accompany the Church in a profound spiritual renewal. “I believe the Lord wants a change in the Church”, he said. “Historians say it takes 100 years for a Council to be applied”, said the Pope, “so we are halfway there”. Then he added: “If you want to help me, act in such a way as to move the [Second Vatican] Council forward in the Church. And help me with your prayer”.

Another young Jesuit asked him how to live without fear in a world that seems to be in chaos. Pope Francis advised him not to enter chaos alone, “because you will end badly”, he said. “But if you enter with the grace of spiritual exchange with your Provincial, with your community, if you do so as a mission and with the Lord…there is no need to be afraid…God is strong”.

During the encounter, Pope Francis also met Archbishop Sigitas Tamkevičius, who was imprisoned for years by the KGB. Sunday 23 September was the day the Pope visited Lithuania’s Museum of Occupations and Struggles for Freedom, the infamous prison where opponents of the Soviet regime were detained and tortured. Pope Francis was deeply touched by what he saw there and shared his impressions with his brother Jesuits. “Jesus descended into hell”, he reminded them, “and I advise you not to be afraid to descend into the hell of the people”. “We need to go down into hell”, he said, “in order to touch their wounds”. When you touch the wounds of others, you are touching the wounds of Christ, said Pope Francis, and “a Jesuit should never be afraid of this”.

Wounds past and present

These wounds are not limited to what happened here in the past, he continued. Referring to the “situation of some prisons in North Africa”, the Pope said we get all upset about what was done by the Communists, the Nazis and the Fascists: “But today? Doesn’t it happen again today?”, he asked. “Of course, except it’s done with silken white gloves!”

Reflections for the XXIX Sunday