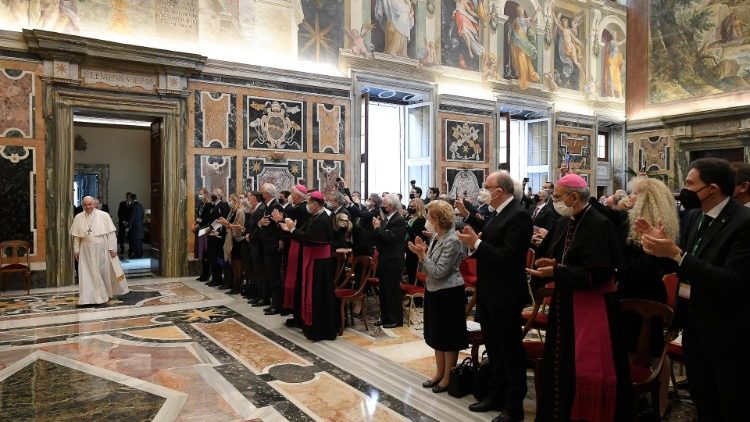 In an address to the Centesimus Annus – Pro Pontifice Foundation, Pope Francis says developing a more just and equitable society, and protecting the freedom and dignity of persons, is at the heart of the mission to implement the Church’s social teaching.

Pope Francis on Saturday addressed members of the Institution Centesimus Annus – Pro Pontifice, as they concluded their 2021 International Convention on “Solidarity, Cooperation and Responsibility: the antidotes to fight injustices, inequalities and exclusions.”

In his remarks, the Holy Father expressed his appreciation for the work of the Foundation, noting that the response to the injustice and exploitation we see throughout the world, must consist not only in condemnation, but in “the active promotion of the good.”

The Foundation’s commitment to study and research on new models of economic and social development, inspired by Catholic social teaching, “is important and greatly needed,” he said. “In soil contaminated by the predominance of finance, we need to sow many small seeds that can bear fruit in an economy that is equitable and beneficial, humane and people-centred.”

The concepts of solidarity, cooperation, and responsibility – the focus of the conference – are “three pillars of the Church’s social teaching,” Pope Francis said. He explained that the Church’s social doctrine is based on the interplay between persons and is directed to the common good, as opposed to both individualistic and collectivist models.

Grounded in the word of God

Catholic social teaching, he insisted, “is grounded in the world of God, and seeks to promote integral human development on the basis of our faith in the God who became man.” For this reason, he said, “it should be practised, cherished and developed,” because “it is a treasure of the Church’s tradition!”

The study of this teaching, he continued, has led the Centesimus Annus Foundation “to combat forms of inequality that strike especially the most fragile, and to work in promoting a real and effective fraternity.”

He added that the three words at the centre of the Foundation’s discussions “recall the mystery of God himself, who, as Trinity, a communion of persons, inspires us to find our fulfilment in generous openness to others (solidarity), through collaboration with others (cooperation) and through commitment to others (responsibility).”

Pope Francis explained that the mission of implementing the Church’s social teaching commits us to working for the development of a more just and equitable society, but also upholding and safeguarding the dignity and freedom of every human person.

We are not alone

“Dear friends,” the Pope said, “in promoting these values and this way of living, we often find ourselves going against the grain, yet let us always remember that we are not alone.  God has drawn near to us.”

A dream that can come true

Although the dream of a more just and equitable world might seem unattainable, Pope Francis said, “we prefer to believe that it is a dream that can come true, for it is the dream of the triune God.”

And he encouraged members of the Foundation to “continue resolutely” in their path, as the good they do “for every person on earth brings joy to the heart of God in heaven.”