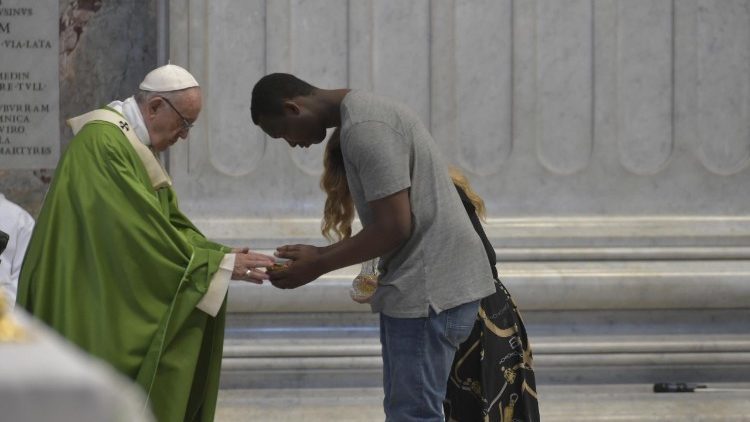 Pope Francis on Friday mourned the refugees and migrants lost at sea and reminded the world that their blood cries out to the conscience of each one of us.  The response to the Lord’s appeal, “Where is your brother? His blood cries out to me”, “even if at times generous, has not been enough, and we continue to grieve thousands of deaths,” the Pope said in his homilyduring the July 6 Mass in Rome’s St. Peter’s Basilica to commemorate the 5th anniversary of his July 8, 2013 visit to the tiny Italian island of Lampedusa.

The Holy Father had dedicated his first pastoral visit outside Rome to the tiny island off Sicily, one of the main entry points into Europe for poor and desperate refugees and migrants from North Africa who risk their lives to cross the Mediterranean in overcrowded and unsafe vessels and small boats.

Recalling the warning of the Prophet Amos in the first reading, the Pope lamented  that the many poor trampled upon and brought to ruin  are “victims of that culture of waste that has been denounced time and time again.”  Among them, he said, are “migrants and refugees who continue to knock at the door of nations that enjoy greater prosperity.”

The Lord’s eyes, hands and voice

The Pope said that in Jesus’ invitation, “Come to me, all who labour and are heavy laden, and I will give you rest”, the Lord promises refreshment and freedom to all the oppressed of our world, but in this task, the Lord needs our eyes and our hands to “fulfil his promise”.

Condemning the complicit silence of many, the Pope said Lord needs our voice to protest the injustices committed.   Above all, he said, “the Lord needs our hearts to show his merciful love towards the least, the outcast, the abandoned, the marginalized.”

Referring to the Gospel episode of the call of Matthews where the Pharisees murmur against Jesus eating with tax collectors and sinners, the Pope recalled the Lord’s rebuke, “Go and learn what this means, ‘I desire mercy, and not sacrifice’”.   The Pope  said it is a finger pointed at thesterile hypocrisy of those who do not want to “dirty the hands”, like the priest or the Levite in the parable of the Good Samaritan.”  He condemned this powerful temptation that takes the “form of closing our hearts to those who have the right, just as we do, to security and dignified living conditions.”  “It builds walls, real or virtual, rather than bridges,” the Pope warned.

In the face of today’s phenomenon of migration, the response that is needed, he said, is one ofsolidarity and mercy, and less of calculations.

The Pope thanked rescuers of refugees and migrants for embodying the parable of the Good Samaritan,  who, he said, stopped to save the life of the poor man beaten by bandits, without asking where he was from, his reasons for travelling or his documents.  The Holy Father also urged refugees and migrants to continue to be witnesses of hope in a world, which he said is increasingly concerned about the present, with little vision for the future and averse to sharing.

China and the bishops: Why is this issue so important?