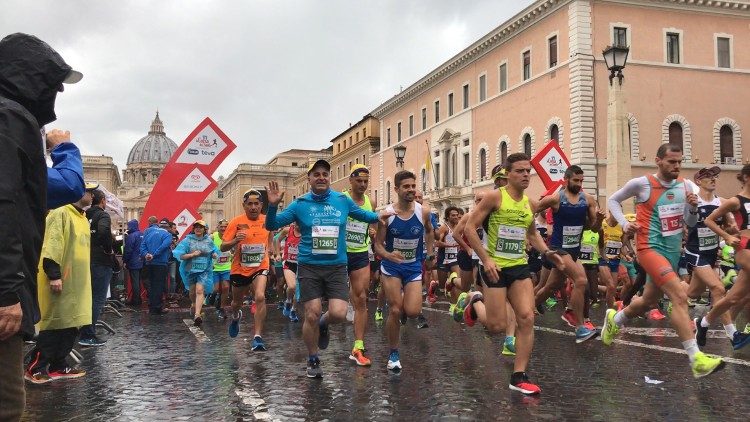 On Wednesday morning, after the General Audience, Pope Francis received a small number of athletes who were to participate tomorrow in an event called “We Run Together”.

Pope Francis’s first audience in months was granted to a small group of young athletes who would have participated tomorrow in an international meeting called “We Run Together – Simul Currebant”. He met with them in his private library after the General Audience on Wednesday morning. The event had been organized by the Vatican Athletic association in collaboration with the athletic group Fiamme Gialle, or Yellow Flames of the Italian law enforcement agency that covers financial crimes, the Pontifical Council for Culture’s “Courtyard of the Gentiles” and the Italian Federation of Light Athletics (FIDAL) of the Lazio Region.

The meeting had originally been scheduled to take place tomorrow, but has been cancelled due to the coronavirus crisis.

The values of sports

Pope Francis began his remarks to the children in the group thanking them for what they do. “Everyone is doing something for the community, for others. And this is what joy is. Right?” In the case of those present, the Pope said it is “the joy of giving, of offering the beauty and the possibility of sports to everyone”.

He continued saying that offering joy and happiness to others is a creative human attitude. The Pope reminded the group that people go so far as to give their lives to others: mothers and fathers for their children, and many others”.

Pope Francis highlighted that what makes what these children do beautiful is that they do not compete or play games. Rather, they do something together. “You run together”, he said in English.

To illustrate this, the Pope used the Gospel passage of the two disciples running toward the tomb on Easter morning (see John 20:3-6). The younger John outran the older Peter, but waited for him before entering the empty tomb. He also called to mind an “ancient medieval rule for pilgrims” that says the pace should be set according to the weakest person in the group.

This is what we all need to learn, Pope Francis said in concluding his remarks to the young athletes: “to go at the pace of the people who have another speed, or at least to consider them and to accommodate our pace to theirs.”

The Pope then gave a formal message regarding the event that would have taken place tomorrow. It was an International Athletic Meeting in which Olympic champions would have run alongside Paralympic athletes, refugees, migrants and prisoners.

Pope Francis called the planned event “a concrete witness of what sports should be: a –‘bridge’ that unites men and women of different religions and cultures, promoting inclusion, friendship, solidarity, education. In other words, a ‘bridge’ of peace”.

“And thus, the many athletes who were going to participate, and whom I would have had the pleasure to meet personally, are donating several objects…for a charitable initiative.”

The proceeds from this initiative will benefit the “Pope John XXIII” hospital in Bergamo and the “Poliambulance Foundation” in Brescia. Both of these institutions have been serving patients suffering from the coronavirus in the hard hit Italian Lombardy region. It is a way of showing gratitude, the Pope said, to the medical personal. “They are heroes!” he said, who in risking their lives to save others fulfill Jesus’s words: “Greater love than this no one has than to lay down one’s life for a friend” (see John 15:13).

Pope Francis ended his message encouraging those in the group to live out their passion for sport as “an esperience of unity and solidarity”.

“It is specifically the true values of sports that are particularly important in facing this period of the pandemic and above all, the difficult aftermath. And in this spirit I invite you to run, together, on the track of life.”

More about the event

A statement released by the event organizers explained more about the charitable initiative Pope Francis referred to. The full name of the event is “We Run Together: a Race of Solidarity against Covid-19”. An auction will be active beginning on Monday 8 June at the charitystars.com fundraising platform. Items have been donated by such recent athletic champions as Tania Cagnotto, Arianna Fontana, Sofia Goggia, Gianmarco Tamberi, Filippo Tortu, Dorothea Wierer, and by older athletes such as Kristian Ghedina, Antonio Rossi, and many others.

Pope names new Secretary of Congregation for Causes of…