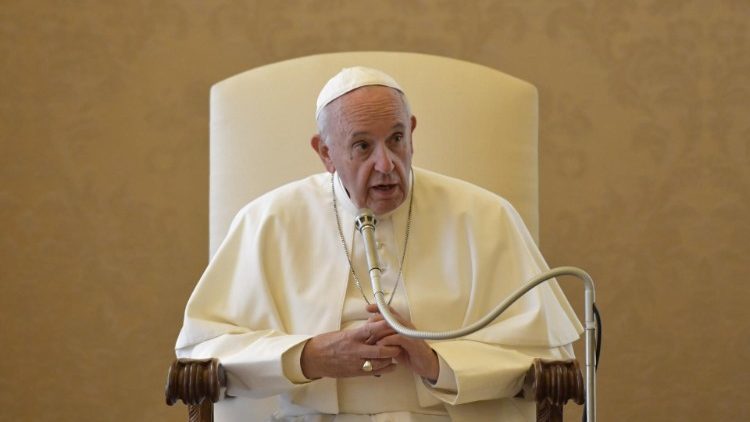 Speaking to participants in the General Chapter of the Scalabrinians on Monday, Pope Francis calls on the missionaries to listen to migrants, to walk alongside them, and to share Jesus with them through the Word and the Eucharist.

In his prepared remarks, Pope Francis invited the Scalabrinian Missionaries to help migrants remember both the good and bad moments of their lives and to preach the Gospel to them by their closeness.

The Missionaries of Saint Charles Borromeo are holding their General Chapter in Rome on the theme: Encounter and Journey: “Jesus walked with them. (Lk 24:15)”. The Scalabrinians have sought to be “migrants with the migrants” for the last 25 years.

Pope Francis encouraged them in their mission to migrants and to “proclaim the Word to them and to walk with them.”

“Your mission is carried out in difficult contexts, often characterized by attitudes of suspicion and prejudice, if not outright rejection of the foreigner,” the Pope said. “This spurs you even more to a courageous and persevering apostolic enthusiasm, to bring Christ’s love to those who, far from their homeland and family, risk feeling far from God, too.”

Pope Francis recalled the Gospel episode where the Risen Jesus walks with the disciples to Emmaus and explains the Scriptures to them. “Evangelization is done by walking with people,” he said.

First, he said, we must listen to people, “especially to their dashed hopes, the expectations of their hearts, and their trials of faith,” all in sincere closeness.

“There are so many stories in the hearts of migrants!”, he said. “Both beautiful and terrible ones. The danger is that they be forgotten.” The Holy Father said, “The risk is that migrants become uprooted people, without a face, without an identity.”

He called this lack of identity “a terrible loss, which can be avoided through listening and walking side-by-side with people and migrant communities. To be able to do so is a grace, and it is a resource for the Church and for the world.”

Pope Francis said that, after listening to migrants, we must “give them the Word and the sign of Broken Bread.”

Helping people to know Jesus, the Pope said, means reading the Bible together and discovering the Word of salvation that God wants to share with these men and women. He said we should then invite them to celebrate the Eucharist, “where words fail and the Sign of the Broken Bread remains.”

The Holy Father said the Risen Christ is sending the Scalabrinian Missionaries “to walk together with the many brothers and sisters who journey as migrants along their road from Jerusalem to Emmaus.”

Pope Francis reminded them to remain in Jesus and to live a healthy community life. Otherwise, he said, “we are only doing social activism”.

Pope Francis invites the faithful to pray the Rosary in October