Pope to Premonstratensians: missionary spirit is born out of love 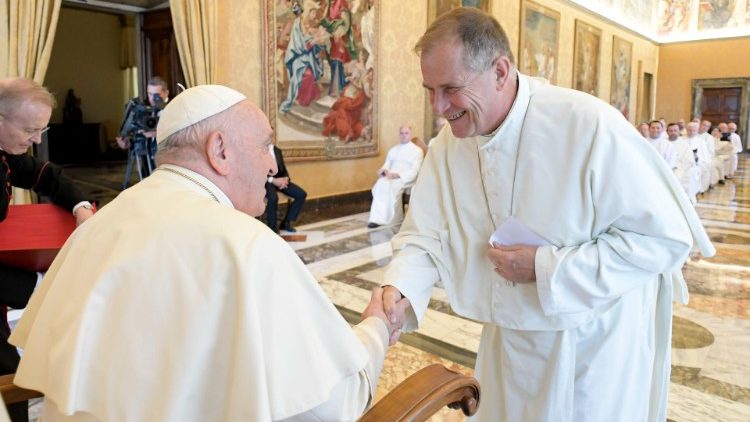 For the 900th anniversary of the foundation of the order of the Premonstratensians, Pope Francis encourages members to reflect on the history of their community and look towards the future, living their lives as missionaries in fraternal coexistence rooted in the Eucharist and the Gospel.

Last year marked the occasion of the 900th anniversary of the founding of the Abby of Prémontré, the first Abby founded in the order of the Premonstratensians.

The order was founded by St. Norbert in 1120 Prémontré, France, and soon spread to regions all over Europe.

Following the monastic rule of St. Augustine, the Premonstratensians combine a monastic, reflective life with a more active religious life influenced by the Cistercian ideals.

Receiving members of the order in the Vatican on Thursday, Pope Francis had words of encouragement and appreciation for them, as he noted the significance of orders such as the Premonstratensians in their ability to remain present and spread as “shining beacons” of hope throughout the trials and successes of human history.

Heart of the community: mission and stability

In his address, Pope Francis reflected on the long history of the order, noting that the foundation of the many Premonstratensian communities throughout history has provided a great sense of stability and mission where they were located.

Each monastery and Abby were deeply connected to both “happy events and trials” of each particular region they were in, the Pope noted, giving a “glimpse of how stability and mission, life in one place and evangelization can walk hand in hand.”

“The presence of a community of sisters or brothers is like a shining beacon in the surroundings.”

Therefore, the charism of the community is in its ability to have both a missionary presence and a sense of stability, with the firm communities “tied to a particular place,” Pope Francis said.

Being a brother or sister in Christ, a missionary open to the will of the Lord, is rooted in the practice of the Liturgy of the Hours and the Eucharist, Pope Francis continued in his address.

Communal prayer offers a culture of fraternal coexistence, which in turn leads to the true missionary hospitality of “making strangers brothers and sisters.”

Throughout their history, the Premonstratensians offered a missionary spirit, which in and of itself is “a story of courage and self-sacrifice, out of love” the Pope continued, leading to the establishment of new stable communities in mission lands.

In this context, Pope Francis invited the members to meditate on the long history of the order, to learn not only from the past but also from each other.

Economic, social and cultural roles of the community

The economic activity of any religious community, Pope Francis said, should be used to serve the mission and the realization of the charisms of the community: “it is never an end in itself, but oriented toward a spiritual goal.”

Furthermore, Pope Francis stressed the importance of sustainability to “take into account the environment and the people who inhabit it with you” so as to create “conditions for effective pastoral care and credible proclamation of the Gospel.”

“The community’s stability and long experience help predict the consequences of long-term choices. Sustainability is a key criterion, as is social justice.”

In addition, the Pope said it is important to care for those living outside of their network through works of charity:

“Along with this concern for good stewardship, you must exercise that for those who are outside the social network, for those who are marginalized because of extreme poverty or frailty and, because of this, difficult to reach. Some needs can only be alleviated through charity, the first step toward better integration into society.”

Taking care of the communities’ economic, social, and cultural models reflects the Premonstratensian way of life, Pope Francis continued, with many of its members having served as pastors, teachers and missionaries, thereby echoing their Jubilee motto “Together, with God, with the people.”

Living in the Eucharist

The Eucharist, the Pope said, has always played a central role in the lives of the Premonstratensians.

“May you, brothers and sisters, become what you celebrate, receive and adore: the body of Christ, and in Him a hearth of communion to which many can warm themselves.”

The Pope concluded his address asking for the guidance of Mary Most Holy, Mother of Christ and the Church, to “help us to become fully human, to be credible witnesses of the Gospel of salvation.”