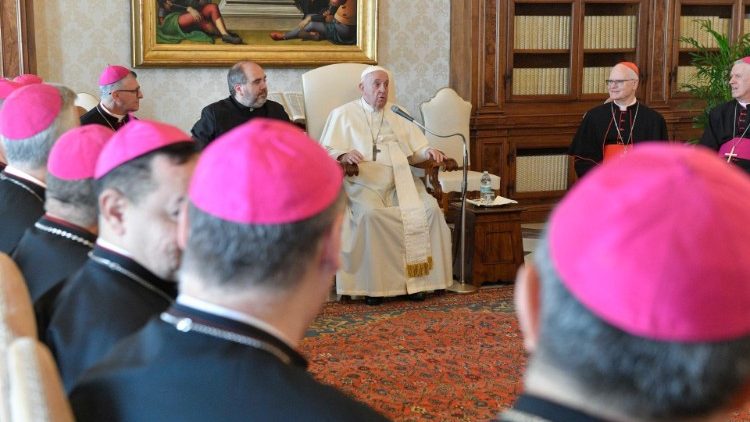 Following Pope Francis’ meeting with the bishops of Brazil’s São Paulo, Aparecida, and Sorocaba regions on Friday, Cardinal Odilio Pedro Scherer says the Pope urged them to be near to God, their brother bishops, priests, and the faithful.

Concerns and recommendations about the Church of Brazil, the life of the country, and the people, as well as political and cultural situations: these topics formed the focus of the two-hour ad limina visit of a group of Brazilian bishops with Pope Francis.

The group of 25 prelates from the provinces of São Paulo, Aparecida, and Sorocaba (the Southern Region 1 of the National Conference of Brazilian Bishops, CNBB) was received on Friday morning in the Apostolic Palace, after having visited several Dicasteries of the Roman Curia in recent days and celebrated Masses in the four papal Basilicas.

After their papal audience, Cardinal Odilio Pedro Scherer, the Archbishop of São Paulo, told Vatican News’ Bianca Fraccalvieri that their dialogue with the Pope was “very fraternal”.

It was a very intense, beautiful moment of renewal of faith and adherence to the faith of Peter and the mission.

The fraternal atmosphere of the meeting between the Pope and Brazilian bishops was also a “beautiful episcopal collegiality,” according to several bishops.

“The Pope told us that we are here as brothers,” they recount.

During the two-hour visit, the themes of synodality, episcopal fraternity, care of the clergy, closeness to the people, problems, and conflicts were addressed.

The Pope gave the floor to all the bishops who asked to speak, and each asked questions or recounted their own experiences and initiatives for evangelization in their dioceses.

“It was a very pleasant conversation, with as much freedom and spontaneity,” said Cardinal Scherer. “He was also very spontaneous, and we addressed several issues that are part of our episcopal mission.”

Each question was answered by the Pope with an indication, always aimed at encouraging the bishops to live fully the expiscopal mission, because, he said—according to those present—that “bishops can truly be witnesses to the truth of Christ and the Gospel.”

Pope Francis also recounted some examples from his priestly and episcopal life, something the bishops said was “a profound moment of friendship, trust, joy.”

Pastors close to the people

“We listened to the Holy Father, his concerns, his recommendations, about the big issues part of his ministry for the whole Church and humanity,” Cardinal Scherer noted. “Some of the recommendations he gave us are very good, starting with the recommendation to be pastors close to the people.”

“Four ways of being near”

Pope Francis also reminded the group of Brazilian bishops of “the four proximities,” already expounded in past conversations with other bishops: “closeness to God, to other bishops, to the clergy, and to the people.”

The Pope also urged them to care for their neighborhoods “every day of our ministry,” said the Archbishop of São Paulo. “He also urged us to be shepherds of hope, to look ahead, not to be frightened in the face of the challenges of our time, because there has never been a time without challenges and difficulties, so we must not be afraid or even discouraged, starting from the joy of the Gospel that must stimulate us to continue our mission.”

Pope Francis arrives for the audience

Pope to Premonstratensians: missionary spirit is born out of love