Pope to Paulines: Evoke hidden thirst for God with all comms channels 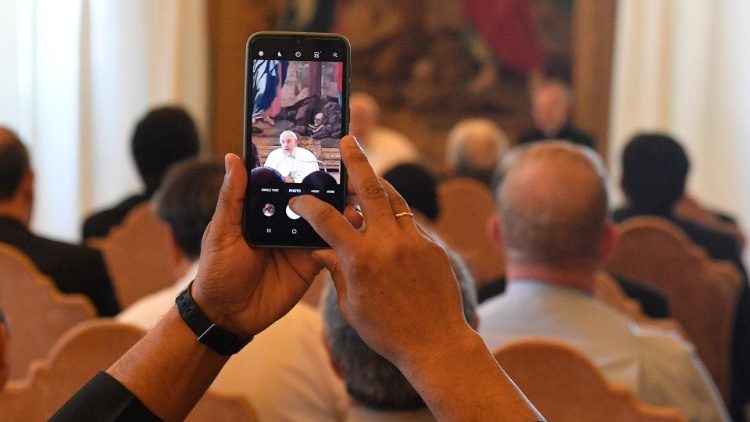 Pope Francis greets participants in the 11th General Chapter of the Society of St. Paul, and urges Paulines to embrace all means of communication to bring forth people’s hidden desire for God.

As the Society of St. Paul wraps up its 11th General Chapter—held from 29 May to 19 June in Ariccia, near Rome—Pope Francis met in the Vatican on Saturday with members of the institute founded by Blessed James Alberione.

In his prepared remarks which were handed to those present, the Pope recalled the Chapter’s guiding theme: “‘Let yourselves be transformed by renewing your way of thinking’ (Rm 12:2): Called to be artisans of communion to prophetically announce the joy of the Gospel in the culture of communication.”

He noted that St. Paul urges Christians to “allow themselves to be transformed,” which means making space for the Holy Spirit to conform us to Christ, so as to transform the world around us.

Transformed to transform the world

Blessed Alberione, said the Pope, called for Paulines to renew their way of thinking.

“Our mentality must first of all be changed, converted, and assimilated to that of Jesus our Teacher, in order to contribute to spreading in society a way of thinking and living based on the Gospel.”

Pope Francis said Paulines should not only embrace all means of communication to spread the Church’s teaching, but also “integrate the message itself into the new culture created by modern forms of communication.”

Technology to build culture of encounter

One key aspect of modern communications, said the Pope, is that of “interpersonal relationships in a globalized and interconnected world,” which impact both the Church and society.

“After the initial euphoria for technological novelties, we now recognize that it is not enough to be ‘on the web” or “connected,” but that we need to understand how our communication—enriched as it is by the digital realm—effectively builds bridges and contributes to building a culture of encounter.”

Pope Francis said Blessed Alberione wanted the Paulines to offer themselves fully to the apostolate, in the footsteps of St. Paul.

The Apostle to the Gentiles, said the Pope, was filled with a missionary spirit but carried out his mission in community with others around him. In other words, he worked “with a network” to communicate the Good News to people where and how they live.

Pope Francis thus encouraged the Paulines to employ their professional competencies for the sake of the Gospel in communion.

“You are called to live communion in fraternity,” he said, “in your relationships with the diocesan communities in which you live and within the larger and diverse Pauline Family. Your horizon is that of Paul: the whole of humanity of our times.”

The Pope wrapped up his speech by recalling that the Paulines’ mission is to help people who appear far from the Church to become aware of their “desire for God and thirst for love and truth.”

Pope to International Community: ‘Don‘t forget the people of Myanmar’