Pope to International Community: ‘Don‘t forget the people of Myanmar’ 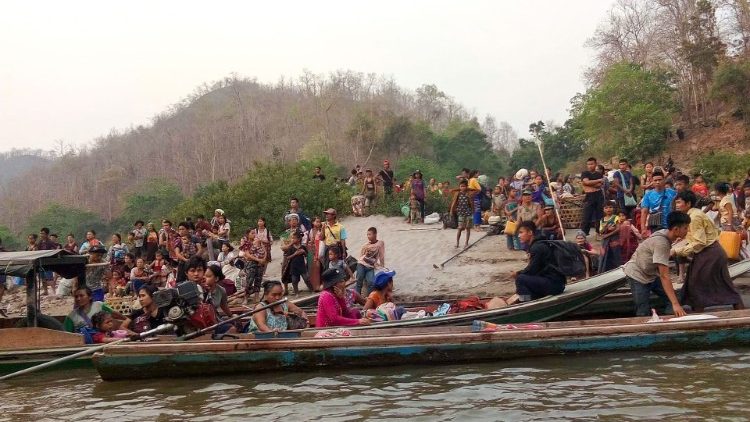 Pope Francis issues an appeal to not look away from the suffering of so many people in Myanmar who continue to be subjected to violence after the military coup in February 2021.

Pope Francis on Sunday called on the International Community to take action for the people of Myanmar who continue to suffer violence and displacement following the military coup on 1 February 2021.

Speaking after the recitation of the Angelus prayer, the Pope said that he joins “the appeal of the bishops of that beloved land that ask the International Community not to forget the Burmese people,“ not to forget their human dignity and the respect for the right to life, as well as for places of worship, hospitals, schools.

“Yet again we hear the cry of pain of so many people in Myanmar who still lack basic humanitarian aid and who are forced to leave their homes because – they are burned down – and to escape violence.”

This week Myanmar‘s Catholic Bishops wrapped up their General Assembly with a final statement expressing their deep concern for the plight of civilians who continue to bear the brunt of the country‘s ongoing civil war.

They called on all sides of the conflict to respect human life and dignity saying: “Human dignity and the right to life can never be violated. We strongly ask for respect for life and for the sacredness of places of worship, hospitals, schools.“

According to non-governmental organizations, over 1,900 civilians have been killed and 11,000 arrested since the military coup of 1 February 2021, which ousted the newly reelected NDL party over unsubstantiated claims of election fraud.

Moreover, the Tatmadaw –  the Burmese army –  has reportedly continued to target churches and its institutions.

Pope Francis concluded his appeal imparting his blessing on the Burmese community in Italy, which he said, is represented here today.

Pope to Paulines: Evoke hidden thirst for God with all comms channels

Pope: ‘Ask yourselves what you are doing for the people of Ukraine?’