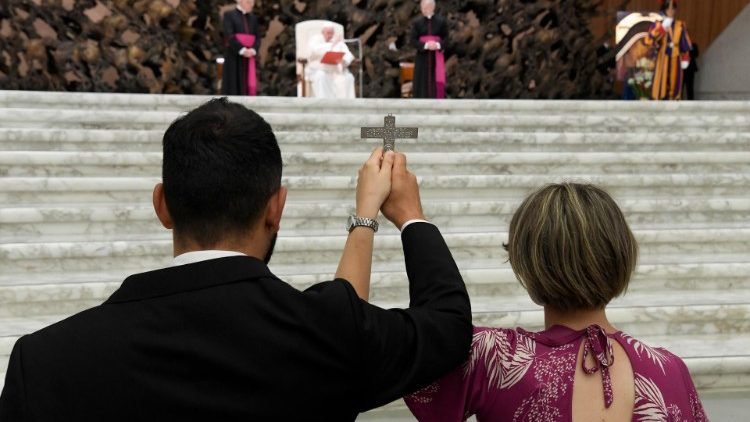 Pope Francis meets 5,500 members of the Neocatechumenal Way, a Catholic lay association founded in Spain in 1964 dedicated to post- and pre-baptismal formation of Christians, and urges them to remain docile to the Holy Spirit.

Following the closing of the five-day 10th World Meeting of Families in Rome, Pope Francis on Monday granted a special audience to members of the Neocatechumenal Way, during which he sent 430 new Neochatechumenal families on mission.

Attending the festive event in the Paul VI Audience Hall in the Vatican were 5,500 members of the association from the five continents, including families from war-torn Ukraine, accompanied by their bishop, as well as Neocatechumenal families from the Diocese of Rome.

The ceremony was introduced by the movements’ initiator and international leader, Kiko Argüello, who took the opportunity to inform the audience and the Pope that the Archdiocese of Madrid is about to officially announce the conclusion of the diocesan phase of the beatification process of the co-founder of the Camino, the late Carmen Hernández (1930-2016). The process was started in 2021.

Addressing participants, Pope Francis encouraged them to continue their missionary work to bring the Gospel of Jesus in a secularized world, under the guidance of the Holy Spirit, while respecting the diverse cultural contexts in which they live.

Noting that cultural diversity is a “richness for the Church” and that the Incarnation of Christ has significance for all peoples and cultures, the Pope underscored the importance of unity in diversity in the Church.

“The Gospel of Jesus adapts to different cultures but is still the same,” he said. He then called on Neocatechumenals to always be “docile to the Spirit and obedient to Jesus.”

In this regard, he further emphasized need to work in communion with their respective bishops, who are the “heads” of the local Churches.

At the end of the meeting, the Pope sent out the new 430 “mission ad gentes” to proclaim the Gospel in various parts of the world, blessing the Mission Crosses and the families with their children.

The Neocatechumenal Way is an itinerary of Catholic formation started in Spain in 1964, which was recognized by Pope St. Paul VI as a fruit of the Second Vatican Council.

The Way engages families who through their witness and life serve to establish the presence of the Catholic Church in countries where the Church is absent or tiny, or to revive and strengthen the presence of Catholic communities in difficult and ‎highly secularized areas.

It draws its inspiration from the catechumenate of the early Catholic Church by which converts from paganism were prepared for baptism.