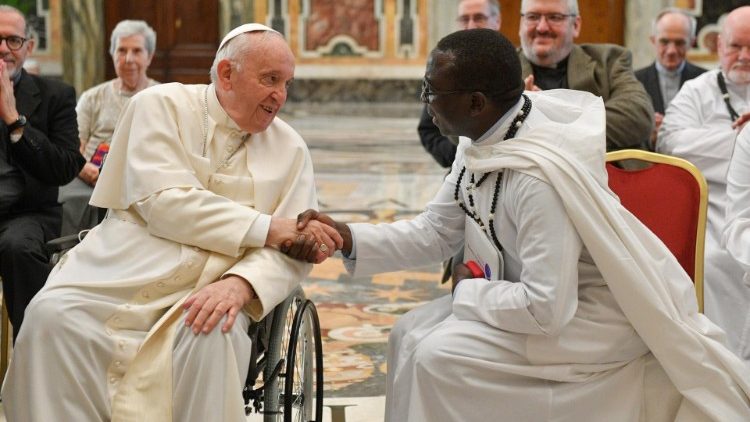 Addressing participants at the General Chapter of the Missionaries of Africa, Pope Francis exhorts them to embrace the meaning and strength of their charism, and invites them to be apostles and witnesses through prayer and fraternity.

Pope Francis on Monday received in audience the participants of the General Chapter of the Missionaries of Africa (The White Fathers) in the Vatican.

In his address to them, the Holy Father expressed regret about having postponed his Apostolic Journey to the Democratic Republic of Congo and South Sudan originally scheduled for the first week of July. He said that it is hard at his age to go on a mission but he draws courage from their prayers and example and is hopeful that he would be able to visit these peoples “whom he carries in his heart.” He, however also announced that he would celebrate a Mass with the Congolese community in Rome on Sunday, 3 July.

“Cultivate the grateful memory of the path the Lord has taken us on. And this gratitude is what fuels the flame of hope,” the Pope said, adding that those who do not thank God for His gifts – albeit strenuous and sometimes painful – do not have “a hopeful soul, open to God’s surprises and hopeful in His providence.”

He added that this spiritual attitude is necessary to bring the seeds of vocation that the Lord brings about with His Spirit and Word to maturity.

The Pope further encouraged them to go ahead with gratitude and hope, because a community that knows how to say “thank you” to God and to our brothers and sisters, and in which we help each other hope in the Risen Lord, is one “that attracts and sustains those who are called.”

Pope Francis then held up the theme of the Chapter: “mission as prophetic witness,” noting that this is where fidelity to the roots, and to the charism that the Spirit entrusted to Cardinal Lavigerie (the founder of the White Fathers) comes into play.

He said that even as Africa and the world changes, the gift embraces its meaning and strength which is sustained in the Missionaries, in the extent that it always leads back to Christ and the Gospel.

Re-echoing the exhortation by the founder who said “Be apostles, nothing but apostles,” the Pope pointed out that an apostle of Christ is “a witness,” an idea that is true “always and everywhere” in the Church, but particularly for the White Fathers who are called to live out their mission in contexts of first evangelization or in places with prevalent Islamic religion.

Witness, the Pope said, means two things: “prayer and fraternity”- an open heart to God and an open heart to brothers and sisters – being in God’s presence and letting Him look at us, every day in worship and drawing from there, the sap from “abiding in Him” in Christ, which “is the condition for being apostles.”

“It is the paradox of mission: you can only go, if you stay. If you are not able to abide in the Lord, you would not be able to go.”

Pope Francis pointed at the witness of St. Charles de Foucauld, noting that though it is another charism, it has much to say to the Missionaries of Africa, as to all Christians of our time. Saint Charles de Foucauld, the Pope pointed out, “drawing upon his intense experience of God, made a journey of transformation towards feeling a brother to all.”

In this light, the Holy Father encouraged prayer and fraternity, inviting the Church to return to its essential core of radiating simplicity – not uniformly – but in the variety of its charisms, ministries and institutions, and letting this shine through as it was at Pentecost with the first community described in the Acts of the Apostles.

Reflecting on prophecy, the Holy Father said that we are often inclined to think of it as an individual reality following the model of the prophets of Israel, but it is also communal, as it is “the community that gives prophetic witness.”

In this regard, the Pope thought of the fraternity formed by people from so many countries and different cultures, acknowledging that it is a challenge that can only be accepted by counting on the help of the Holy Spirit. He added that the small community, living in prayer and fraternity, is also called to dialogue with the environment in which it lives, in contexts where, in addition to poverty, it experiences insecurity and precariousness. This small community is sent to experience “the sweet joy of evangelization.”

Concluding with a request for prayers for himself, the Pope invoked the intercession of Our Lady of Africa upon the White Fathers and he blessed the participants at the Chapter, encouraging them to bring the blessing to the brothers and sisters and the faithful in their communities.

ASIF President: “New steps forward, we must not lower our guard”