Pope to Migration Commission: ‘Give a face to the Church’s charitable action’ 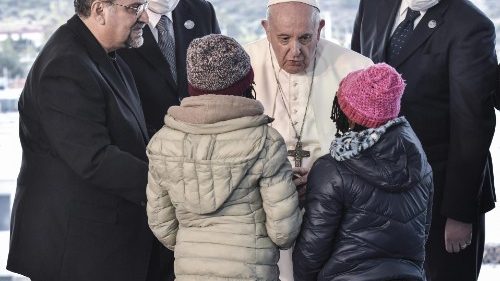 Pope Francis upholds the pastoral activity of caring for migrants and refugees as a means of promoting respect for human rights and human dignity in line with the Church’s social doctrine, in his message to the International Catholic Migration Commission.

Pope Francis on Monday sent a message to members of the International Catholic Migration Commission (ICMC) on the occasion of their Plenary Council which began the same day.

The Holy Father seized the opportunity to emphasize some points to guide their discernment, as they meet to carry out three important tasks: choosing the Commission’s new governing committee, approving the new statutes, and determining its operational guidelines for the coming years.

Created for the care of migrants and refugees

Reflecting on the raison d’être of the Commission, the Pope noted that it was founded in 1951 by Pope Pius XII in order to “form a network among Bishops’ Conferences worldwide to assist them in their pastoral care of migrants and refugees,” and is a collegial expression of the pastoral activity of the bishops, who share, in communion with the Pope, a concern for the universal Church “in a bond of peace, love and unity.”

The Commission, the Pope continued, is distinguished from other organizations operating in civil society and in the Church because of its nature and ecclesial mission. For this reason, it is included in the Apostolic Constitution “Predicate Evangelium” as one of the competencies of the Dicastery for Promoting Integral Human Development.

Thus, the Plenary Council represents the different Bishops’ Conferences affiliated to the Commission and their willingness to work together to “welcome, protect, promote and integrate migrants and refugees.”

He said that while the Commission is primarily called to offer assistance to Bishops’ Conferences and Dioceses in their response to the challenges of migration, it also strives to “promote the development and implementation of projects of pastoral care for migrants and the specialized training of pastoral workers in the field of migration” for service in particular Churches.

On the ad extra level, the Pope noted that the Commission is called to respond to global challenges and migratory emergencies in communion with the local Church. More so, it is engaged in advocacy as an organization of civil society on the international level, and expresses the Church’s commitment for a broader international awareness on migration issues.

In this way, said Pope Francis, “it fosters respect for human rights and promotes human dignity in line with the Church’s social doctrine.”

The Holy Father then thanked the Commission for its work over the past 70 years, which has particularly helped Churches respond to the challenges of the displacement of people caused by the war in Ukraine.

He also highlighted the “millions of asylum seekers, refugees and displaced persons in other parts of the world, who desperately need to be welcomed, protected and loved.”

“As a Church, we wish to serve everyone and to work diligently to build a future of peace. You have the opportunity to give a face to the Church’s charitable activity on their behalf!”

Concluding his message with a request for prayers for himself, the Pope extended his good wishes for the fruitfulness of the work of the Commission and assured the members of his prayers for them.

Pope: ‘Counter a culture of indifference with one of providence’