Pope: ‘Counter a culture of indifference with one of providence’ 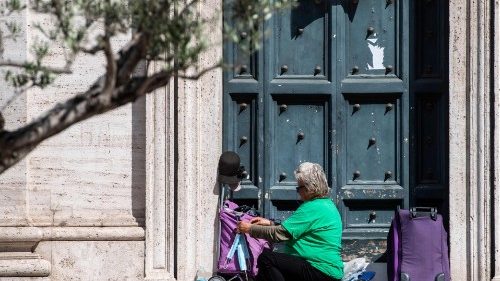 Pope Francis tells the female and male members of the Order of the Poor Servants of Divine Providence that the geographical and existential peripheries to which the Lord sends then are the field in which to announce God’s providential love through mercy.

Pope Francis on Monday said the Church today needs religious communities who are open to the world and unafraid of going forth into the geographical and existential peripheries responding to the needs of the poor and the discarded in society.

Addressing members of the Poor Servants and Poor Sisters Servants of Divine Providence upon the conclusion of their General Chapters, the Pope noted that they continue to be guided by the legacy of their founder, St. Giovanni Calabria and his prophecy of communion.

“It seems to me that you wanted to put it into practice in the setting of these days,” he said noting that “communion is born and nourished first of all in our relationship with God the Trinity,” then “manifested concretely in fraternity.”

The Pope upheld the congregations’ synodal style and the fact the male and female religious are journeying together with the Church, with “some lay people who actively participated in the Chapters strengthening their identity and belonging.”

“This too is prophecy of communion.”

Pope Francis reflected on the charism of the Order that is called “to revive in the world faith in God the Father and filial abandonment to his providence.“

“This is beautiful! “ he said, explaining that when we contemplate Jesus “in his public life, in his preaching, even in his conversations with the disciples,” we see that he had the desire to make the Father known, to make His goodness felt.

The poor are your “pearls”

The Pope called on those present to go forth in the footsteps of St. Giovanni Calabria “especially in the company of the poorest, the last, the discarded of society, who are your “pearls,” as he, your Founder, called them.”

Describing Saint Calabria a prophet, the Pope said his followers must guard his legacy and always remain inserted in the Church of the time, manifesting the paternal and maternal face of God.

The Holy Father invited the religious to counter the current “culture of indifference” that afflicts, in particular, so-called affluent socieites with a “culture of providence.”

This, he said, “does not mean waiting for solutions to problems and goods we need to rain down from heaven.”

“It means seeking to resemble, in the Holy Spirit, our heavenly Father in caring for his creatures, especially the frailest, smallest ones; it means sharing with others the little we have so that no one lacks the necessities.”

“It is the attitude of care, more necessary than ever to counter that of indifference.”

The Pope emphasized the aspect of sharing that, he said, is an essential part of the “prophecy of communion,” on which you want to walk together:

“I do this by recalling the example given to us by our elders, our grandparents. For them, when a guest came to the house suddenly, or when a poor person came knocking for help, it was normal to share a plate of soup or polenta. This was a very concrete way of experiencing Providence, as sharing,” he said.

Thus, he invited them to recover certain values, and just as Jesus did, serve Providence by practicing sharing.

Open to the world

The Pope warned against the temptation of retreating into oneself and into self-referentiality and reminded the Calabrian family that the geographical and existential peripheries to which the Lord sends them are the field in which to announce the providential love of the Father through superabundant mercy, manifesting the tenderness of God’s face without prejudice and exclusion.

“Love the poor by being poor.”

Finally, speaking off-the-cuff, Pope Francis reminded those present never to neglect that spirit of humanity also within the communities themselves.

“One of the things that destroys human fraternity – humanity – is gossip: please be careful. Never gossip about each other. If you have a problem with a sister or brother, go and tell them to their face,” he said, noting that otherwise hurt and destruction can ensue.

Pope to Migration Commission: ‘Give a face to the Church’s charitable action’