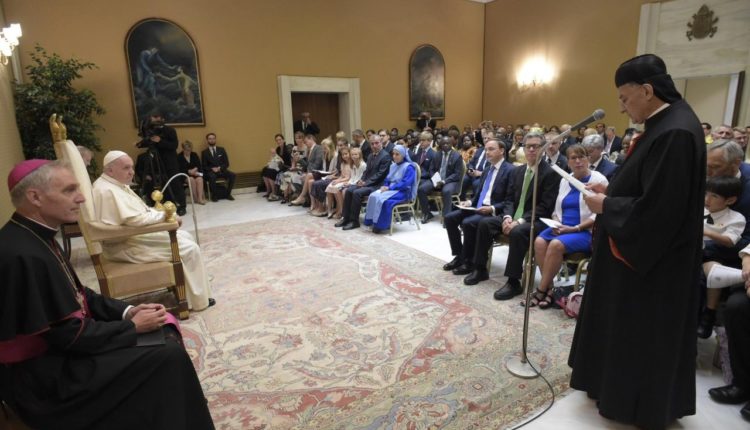 Share
Pope Francis met with the International Catholic Legislators Network (ICLN) during their 9th annual conference, telling them that their position as Christian’s with authoritative roles is to spread laws based on the teachings of the Church in order to aid Christians and other religious minorities who are being persecuted worldwide.

During the 9th annual International Catholic Legislators Network (ICLN) meeting, the Holy Father stated that the theme of religious freedom and conscience, which has been placed at the centre of reflections during this year’s ICLN meeting, is “fundamental and current”.

Pope Francis reminds the members of the ICLN of one of the Second Vatican Council’s most important documents, published on the 7th of December 1965: The Declaration Dignitatis humanae, which is still relevant today. The Pope said that at the time the Conciliar Fathersdiscussed the worry that arose surrounding the regimes that made an effort to

force citizens from practicing their religion and make life difficult and dangerous for religious communities,

despite freedom of religion being recognised in their constitutions.

The Holy Father then spoke about how Dignitatis humanae can be applied to religious persecution nowadays – stating that, sadly, this phenomenon still persists in some countries. The situation has in fact worsened for Christians and other religious minorities who are based in regions affected by fundamentalism, he said.

Not a hero but a testimony

Pope Francis told the members of ICLN that, though they all play different roles within their respective countries, what they have in common is the good will to serve the Kingdom of God through an honest political commitment.

Far from feeling or appearing as a hero or a victim, the Christian politician is called upon, first and foremost, like every baptised person, to try to be a witness – through humility and courage – and to propose consistent laws based on the Christian view of humanity and society, always seeking collaboration with all those who share these views.

The International Catholic Legislators Network (ICLN) is an association of legislators, government representatives, experts and civil and political authorities. Their annual meeting includes an audience with the Holy Father in order to nurture their formation and education. They meet with the aim of reaching and spreading a unified vision of proposed themes, based on the Church’s teachings, in accordance with their roles as individuals in governments and other institutions within their countries.

This year marks the 9th annual meeting of the ICLN, under the title “The ICLN Religious Freedom Summit”. This theme is dedicated to reflecting upon the attention that the Church has placed over the last few years on persecuted Christians worldwide and to developing future initiatives in a situation in which, “there is hope”, according to the President of ICLN, Prof. Dr. Christiaan Alting von Geusau.

Pope Francis sends video message to Ireland ahead of his visit