Pope to Economy of Francesco youth: ‘Like St. Francis, economy must embrace the poor’ 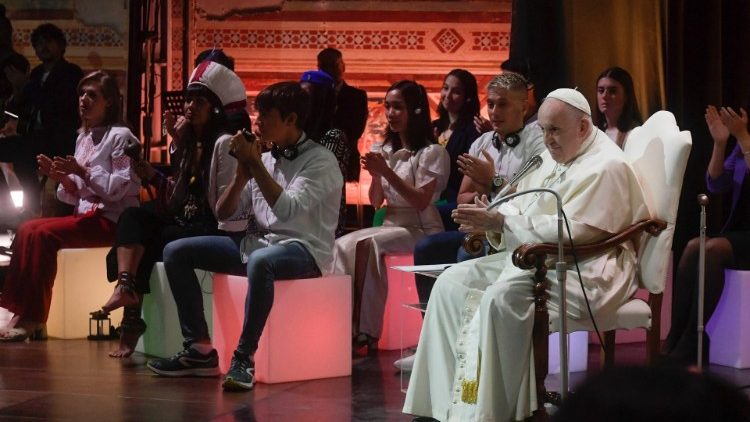 Pope Francis calls on the young people of the Economy of Francesco to work for social, relational and spiritual sustainability, and to recognize the cry of the poor and the cry of the planet.

Pope Francis opened his meeting with these words of encouragement for the young people taking part in the Economy of Francesco, reminding them that they can change the world for the better.

“You young people, with the help of God, know what to do, you can do it. Young people have done this before in the course of history.”

The Holy Father recognized that previous generations have left to the young many riches, but “have not known how to protect the planet and are not securing peace.” Young people, he said, “are called to become artisans and builders of our common home.”

A prophetic vision of the environment and the earth

Pope Francis also highlighted the model of prophecy that was the focus of the Economy of Francesco, and insisted on the need for a “new vision of the environment and the earth.”

In addition to ecological sustainability, the Pope also called attention to the social, relational, and spiritual dimensions of sustainibility.

This, he said, involves recognizing the cry of the poor in the cry of the earth, and keeping the poor ever in mind; building relationships to overcome a “famine of happiness in the modern world”; and recognizing that spiritual capital is prior to, and more important then, economic capital.

Respect, love, and care for the poor

Recalling the love of Saint Francis for the poor, Pope Francis insisted that the Economy of Francesco must “respect, love, and care for the poor, for every poor person, for every fragile and vulnerable person.”

This, he said, means not only working for the poor, but changing the economy. We need not embrace poverty, as Saint Francis did, but must change the economy in order to combat the misery people face.

He invited them to look at the world with the eyes of the poorest of the poor; to remember those who work with their hands and the importance of work; and to “incarnate” their ideas in concrete actions.