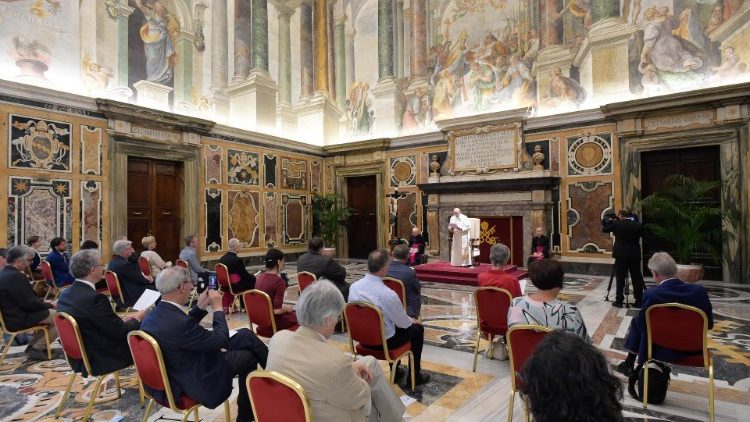 Pope Francis on Friday received in audience in the Vatican representatives from the Belgian Catholic magazine, “Tertio”. He spoke to them about the call of a Christian media person.

Amid the confusion of voices and messages that surround us, a Christian journalist is called to be a new witness to the truth, thus becoming a bearer of hope and confidence in the future.

This was the message at the heart of  Pope Francis’ address to some 30 representatives of “Tertio”, a Belgian weekly magazine that analyses current events and interprets them from a Christian, and more specifically Catholic, perspective.  Established in 2000, the magazine takes its name from the 1994 Apostolic Letter Tertio Millennio Adveniente of Saint Pope John Paul II, in preparation for the Great Jubilee of the Year 2000.

Fostering a culture of encounter

Pope Francis recalled his predecessor who said communicators are “called to interpret the present time and identify ways for communicating the Gospel according to the language and sensibility of the contemporary human person”.

The magazine’s name, Pope Francis said, is not only a call to hope, but also aims to make theChurch’s voice and that of Christian intellectuals heard in an increasingly secularized media scenario, in order to enrich it with constructive reflections. By seeking a positive vision of people and facts, and by rejecting prejudices, he said, Christian journalists foster a culture of encounter through which it is possible to see reality with a confident gaze.

Pope Francis drew attention to the noteworthy contribution of the Christian media to the growth of a new way of life in Christian communities, free from all forms of preconception and exclusion. In this regard, he denounced gossip or calumny, saying it closes the heart of the community and disrupts the unity of the Church.  The devil, the “great gossiper”,  he said, goes about speaking evil about others, because he is the liar who tries to prevent the Church from being a community.

All part of a living fabric

Reminding the representatives of “Tertio” of the “high professional conscience” of a Christian Journalist, the Pope said they are called to offer a new witness in the world of communication without concealing the truth or manipulating information.  Amid the confusion of voices and messages that surround us, what is needed is a human narrative that speaks to us about us and the beauty that dwells in us.

As protagonists of this “narration”, journalists are called to look at the world and events with tenderness, that all are part of a living fabric in which we are all interconnected.

Hence, the Christian information professional must be a bearer of hope and confidence in the future, so that the present becomes liveable.  This is particularly needed in the current pandemic, where Christian journalists are called to be the “sowers of this hope in a better tomorrow”.  In this context, the Pope said, the media can help to ensure that people do not become ill with loneliness and can receive a word of comfort.