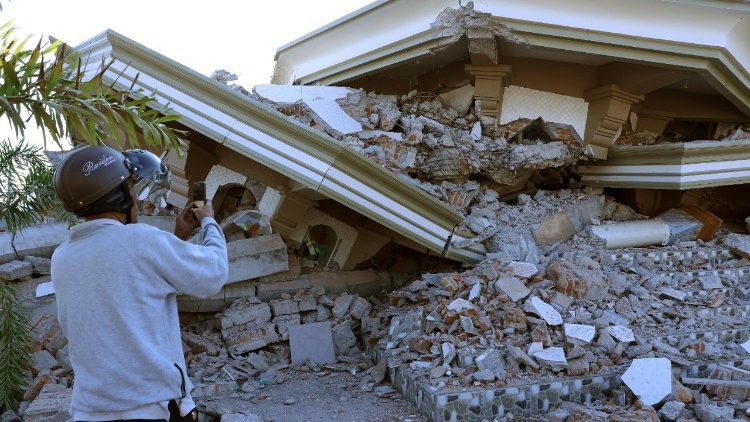 Pope Francis on Monday expressed his “heartfelt solidarity” with all those affected by the massive 7.0-magnitude earthquake that struck Indonesia’s Lombok island on Sunday.

In a telegram sent to Indonesia’s Church and civil authorities, the Holy Father said he felt “great sadness” when informed of the “tragic loss of life and destruction of property caused by the earthquakes”.

The Pope said he is praying for “the repose of the deceased, the healing of the injured, and the consolation of all who grieve the loss of their loved ones.”

Pope Francis encouraged the search and rescue efforts and invoked “upon the people of Indonesia divine blessings of consolation and strength.”

Widespread damage on Lombok and Bali

Vatican News’ correspondent, Alastair Wanklyn, says at least 98 people died when the earthquake struck the Indonesian islands of Lombok and Bali. He said homes collapsed, and one aid agency is calling for blood donations to help the injured. Here is his report:

Panicked residents fled buildings, on the islands of Lombok and Bali, Indonesia. One survivor said people were injured by falling debris. Thousands of homes were damaged or destroyed, and even hospitals were affected.

The Indonesian Red Cross called for donations of blood. It said it is flying in tarpaulins and mattresses for survivors made homeless.

Meanwhile, President Joko Widodo told authorities to help foreign tourists get home. Bali and Lombok are popular destinations for tourists from Europe and Australia and from Muslim nations in the Middle East.

Around 1,000 tourists were being evacuated from three small islands, reported one Indonesian newspaper.

The magnitude-7 quake came a week after a similar-sized tremor. The earlier one left around 20 people dead.  Across the region a large number of buildings are now so damaged they may need to be rebuilt.

At least one Catholic parish church in the city of Mataram in Lombok is damaged. And at the cathedral in Bali’s capital, Denpasar, the ceiling fell. But local media quoted a priest saying the tremor struck after Mass ended, and there were no casualties

Pope at Audience: Christians turn our gaze to Christ crucified