Pope at Audience: Christians turn our gaze to Christ crucified 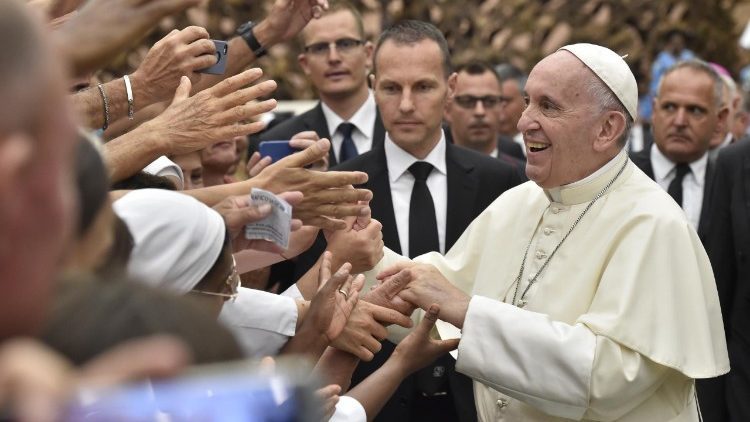 Pope Francis continued his meditation on the Ten Commandments at Wednesday’s General Audience, focusing on the theme of idolatry. He took his cue from the episode of the golden calf, the idol par excellence.

The story of the golden calf, found in the book of Exodus, takes place in the desert, “a place where instability and insecurity reign, where water, food, and shelter are lacking.” The desert, the Pope said, “is an image of human life,” which is filled with uncertainty that can lead to idolatry. Like the Jewish people in the desert, men and women of every age seek security in visible “gods,” gods of their own making, “a do-it-yourself religion.” “When God does not show Himself,” the Pope said, “we fashion a god to suit us.”

The golden calf made by Aaron represented fertility and abundance, but also energy and strength, the Pope said. It was made of gold to symbolize riches. “Success, power, and money” will always be temptations; the golden calf is “the symbol of all the desires that give us the illusion of freedom,” but actually end up enslaving us.

Pope Francis said all this comes from an inability to trust completely in God, “which allows us to endure even weakness, uncertainty, and instability.” When our confidence in God fails, “it is easy to fall into idolatry, and become content with meagre assurances.”

but actually end up enslaving us.

Pope Francis said all this comes from an inability to trust completely in God, “which allows us to endure even weakness, uncertainty, and instability.” When our confidence in God fails, “it is easy to fall into idolatry, and become content with meagre assurances.”

It is only when we look to Christ, who became poor for our sake, “that we discover that recognizing our own weakness is not the misfortune of human life, but rather the condition” that allows us “to open ourselves to Him who is truly strong.” The salvation that comes from God “enters through the gate of weakness.”

We Christians, the Pope said, “turn our gaze to Christ crucified, who is weak, despised, and stripped of everything He possesses.” But Jesus crucified shows us the true face of God. “He comes to reveal the paternity of God: In Christ, our fragility is no longer a curse, but a place of encounter with the Father, and a source of new strength from on high.”

At the conclusion of the Audience, Pope Francis had special greetings for all those named for the Saint of the day, St Dominic Guzman. “His example as a faithful servant of Christ and of His Church should be an encouragement and an incentive for all of us.” And he recalled that Thursday is the feast of St Teresa Benedicta of the Cross, (Edith Stein), whom he described as “a martyr, a woman of coherent witness, a woman who sought God with sincerity, with love; a woman martyr of her Jewish and Christian people.” “From heaven, may she, a Patron of Europe, pray and preserve Europe.”

Reflections for the XIX Sunday