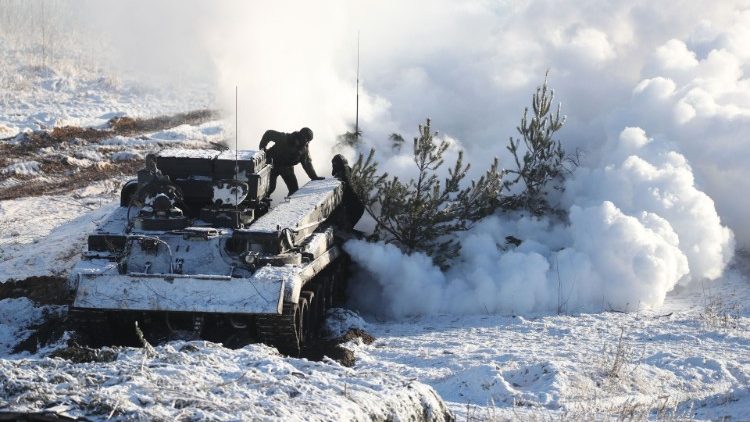 Pope Francis urges world leaders to seek a peaceful solution to the situation in and around Ukraine, as Western nations warn Russia could invade its neighbor at any time.

As a host of Western nations urge their citizens to leave Ukraine, Pope Francis has renewed his prayers for the eastern European country.

Speaking Sunday at the Angelus in St. Peter’s Square, the Pope said the news coming out of Ukraine is “very worrying”.

He entrusted the situation to the intercession of the Blessed Virgin Mary, and appealed to political leaders to spare no effort to seek out peace.

And he invited everyone to pray in silence for a moment so that peace might prevail.

“The news coming out of Ukraine is very worrying. I entrust to the intercession of the Virgin Mary, and to the conscience of political leaders, every effort on behalf of peace. Let us pray in silence.”

Pope Francis’ call to pray for peace came a day after US President Joe Biden warned his Russian counterpart that invading Ukraine would cause “widespread human suffering.”

The White House said Biden also told Russian President Putin that the West was still committed to diplomacy to end the crisis.

But President Biden stressed that Western allies were, in his words, “equally prepared for other scenarios.”

US Secretary of State Antony Blinken explained that those scenarios could include sanctions and military action in Eastern Europe.

“We and our allies have made this crystal clear to Moscow: If President Putin decides to take military action, we will swiftly impose severe economic sanctions in coordination with allies and partners around the world. We’ll bolster Ukraine’s ability to defend itself; we will reinforce our allies on the eastern flank of NATO,” Blinken told reporters.

He added that he would “underscore this unity and resolve” when speaking with Russian Foreign Minister Sergei Lavrov.

As the Russian military build-up continues, Blinken also said the “imminent” threat of a Russian invasion justified evacuating the US embassy in Kyiv, Ukraine.

The White House did not suggest that Sunday’s hourlong call between Presidents Biden and Putin diminished the threat of an imminent war in Europe.

However, Ukrainian President Volodymyr Zelensky went out of his way to urge calm. He said his nation is now better prepared after Russia annexed Ukraine’s Crimea Peninsula in 2014 and supported pro-Russian separatists in the east. “We have to be ready each day. And it [the tensions with Russia] began not yesterday. It began in 2014. So we are ready,” he said.

Zelensky stressed that he realized “it can be each day” [that a Russian invasion begins]. That is why I have to analyze all the information which we have. We have a lot of information because we are on these borders. They are our borders; it is our territory,” he said.

“And now the best friend for enemies that is panic in our country. And all this information only helps to create panic. It doesn’t help us,” the Ukrainian leader added.

His call for calm also follows remarks from a leading Russian military expert.

Colonel Konstantin Sivkov, deputy president of the Kremlin-backed Russian Academy of Missile and Artillery Sciences, fears a conflict between Russia and the United States over Ukraine could escalate into nuclear warfare.

That, he said, would be “the path to Armageddon,” referring to the Biblical battle of the end times. He said such a nuclear war would destroy the US and Russia known today, and change the world forever.

With so much at stake, diplomacy continues to overcome what has been called Europe’s biggest security crisis in decades.

Pope at Angelus: Jesus’ disciples are poor and happy