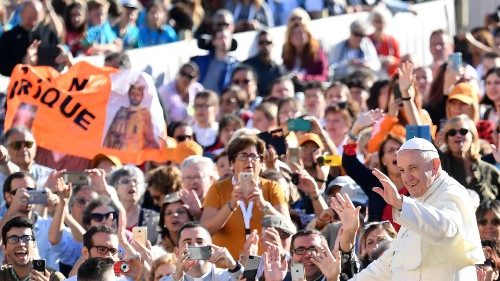 St. Pope John Paul II served as the Archbishop of Krakow from 1964 until his election as pope on 16 October, 1978.

Greeting the pilgrims from Krakow who are in Rome to mark the 40th anniversary of the election of John Paull II, Pope Francis expressed admiration for his predecessor’s great abundance of gifts, which he largely inherited from the treasure of faith and holiness of Poland and its Church.

Mentioning saints from Krakow such as Stanislaus, Queen Hedwig,  Albert and Faustina, Pope Francis said Pope John Paul learned from them about the boundless dedication to Christ and the great sensitivity for every man, which, he said, were manifested in his priestly, episcopal and papal ministry.

John Paul II also knew how to read the signs of the times in the light of the Gospel, to make it bear fruit for the benefit of his compatriots who through various painful events of their history never lost their faith in God and were faithful to their culture rooted in the Christian spirit.

Pope Francis said that in his fidelity to his culture and Christian faith, John Paul II sought to “ensure that the Church stood up as the guardian of the inalienable rights of man, of the family and of peoples, in order to be a sign of peace, justice and integral development for the whole human family.”

But at the same time, the Polish pope always underscored the priority of grace and obedience to God’s will, before any human calculation.

This rich heritage of John Paul II, Pope Francis said, is for Christians, especially his compatriots, a challenge to be faithful to Christ and to respond with joyful dedication to God’s call to holiness in the daily specific personal, family and social situation of everyday life.