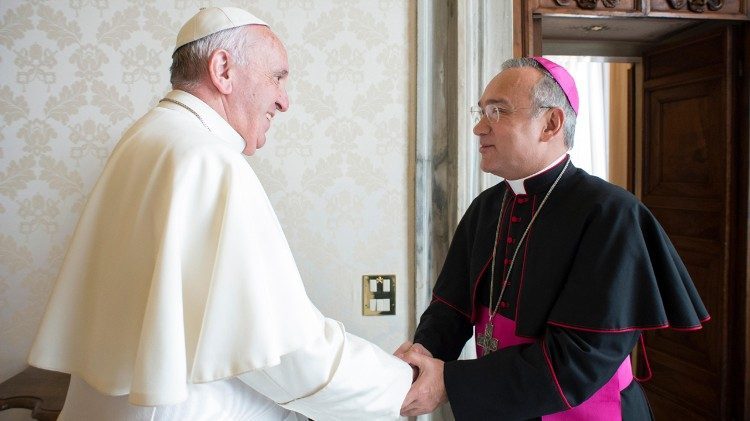 On his first day as Substitute for General Affairs, 58 year-old Venezuelan Archbishop Edgar Peña Parra, was presented to the Secretariat of State by Pope Francis himself, accompanied by Cardinal Parolin

Archbishop Peña Parra took up his new post as Substitute for General Affairs (First Section) of the Secretariat of State on Monday. Appointed by Pope Francis on 15 August, he succeeds Cardinal Angelo Becciu, who was recently named Prefect of the Congregation for the Causes of Saints.

This morning Pope Francis, accompanied by Cardinal Secretary of State Pietro Parolin, presented the prelate to the staff of the three Sections of the Vatican Dicastery, represented by their respective superiors, in the Library of the Secretariat of State. The Holy Father and the new Substitute then personally greeted the officials who had gathered for the occasion.

In the Diplomatic Service of the Holy See

Edgar Peña Parra was born in Maracaibo, Venezuela, on March 6, 1960. With his priestly ordination on August 23, 1985, he was incardinated in the Diocese of Maracaibo. He has a degree in Canon Law. He entered the diplomatic service of the Holy See on 1 April 1993, and subsequently worked in the Pontifical Representations in Kenya, Yugoslavia, at the United Nations Office in Geneva, and in the Apostolic Nunciatures in South Africa, Honduras and Mexico.

Nuncio to Pakistan and Mozambique

The role of the Substitute

The Substitute leads the first Section of the Secretariat of State, which “is especially responsible,”—according to the Apostolic Constitution Pastor Bonus— for expediting “the business concerning the daily service” of the Pope; for fostering relations with the various departments of the Roman Curia, “without prejudice to their autonomy”; and for coordinating their work.

The Section for General Affairs is also responsible for “drawing up and sending out the apostolic constitutions, the letters of decree, the apostolic letters, the letters and other documents” that the Pope entrusts to it; it carries out all the acts concerning the appointments that must be made or approved by the Pope in the Roman Curia and in other bodies dependent on the Holy See; it publishes the acts and public documents of the See in the bulletin entitled “Acta Apostolicae Sedis”; it publishes and disseminates the official communications concerning both the acts of the Pope and the activity of the Holy See.

General Affairs has many other responsibilities, including that of organizing the Pope’s Apostolic Journeys

Synod of Bishops: “How difficult it is to find dawn in twilight”