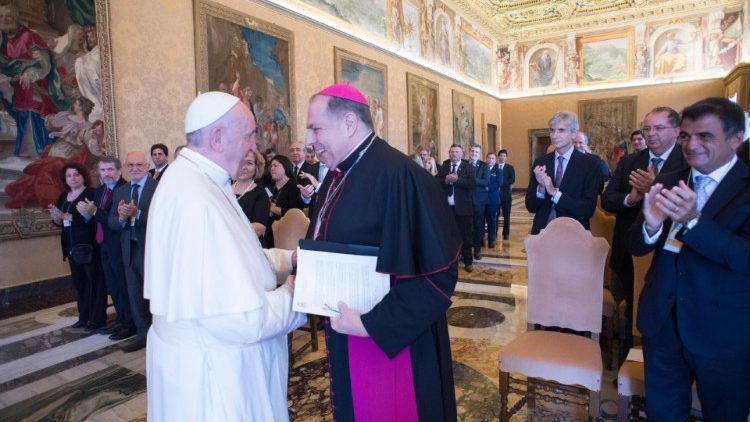 Pope Francis based his speech around 3 key words: miracle, care and trust. These three words are very valuable in a world in which health in general “and particularly in Latin America, is living through an era marked by the economic crisis”, said the Pope.

A brother in every face

With regards to the first word, ‘miracle’, the Pope said, “Those responsible for the institutions will tell me, and rightfully so, that we cannot perform miracles”. But, he explained, a miracle is not doing the impossible. A miracle is looking at an ill, helpless person and seeing a brother.

The Pope explained that “we are called upon to recognise the immense value of every person’s dignity, as a human being, as a son of God”. This, cannot fix every hitch of society, but it can “clear the way for change”, in our minds and in our society.

The value of giving and receiving love

The second word: care. Because curing an ill person does not simply involve applying pharmaceuticals. “We know that when someone who is terminally ill is in serene, human company, they perceive this solidarity.” Even in these difficult cases, when the person can feel such love, respect and acceptance, the value of their being becomes their capability to give and receive love, not their productivity”, said Pope Francis.

One’s life in the hands of another

The final word is ‘trust’. Pope Francis’ first example, is “the trust the ill person has in themselves, that they will get better”. Of no less importance is the worker, who must be able to work in a serene atmosphere, in trusted surroundings.

“Placing yourself in the hands of someone else, especially when your life is at risk, is very difficult” said Pope Francis. The relationship between a doctor and their patient has always been based on responsibility and loyalty.

Carrying hope to those who need it most

“We must fight to keep this deeply human bond whole” said Pope Francis. “No aid institution alone can take the place of a human heart, nor that of human compassion.”, he said, quoting Pope Saint John Paul II.

Pope Francis concluded by urging those present to carry hope and happiness to as many families as possible who, perhaps, have none.