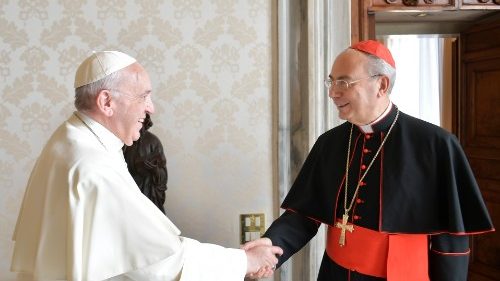 Pope Francis appoints the prefect of the Supreme Tribunal of the Apostolic Signatura, Cardinal Dominique Mamberti, as his special envoy for the 150th anniversary celebrations of the “Pro Petri Sede” Association.

The Pro Petri Sede (or “For the See of Peter”) Association is set to celebrate its 150th anniversary at the Basilica of Kokelberg in Brussels.

The association is active in Belgium, the Netherlands, and Luxembourg, and helps raise funds for initiatives of the Pope and the Holy See.

Pope Francis on Saturday appointed Cardinal Dominique Mamberti as his special envoy for the celebrations.

The Prefect of the Supreme Tribunal of the Apostolic Signatura will preside over the Mass in Brussels on 27 November.

The Pope also sent a letter (written in Latin) to Cardinal Mamberti to accompany the appointment.

He noted that the anniversary celebrations are taking place one year late, due to pandemic restrictions in 2020.

Pope Francis said the Pro Petri Sede Association has spent a century and a half carrying out “an active work of solidarity and charity to ward against indifference and individualism.”

By sending the Cardinal as his special legate, the Pope said he wishes to confirm the association in that important mission.

He said Cardinal Mamberti will preside over the celebrations in his name. “You will greet and encourage all those present to renew their apostolic zeal so that by virtue of the hope that arises from faith, inspired by love for God and piety, they may offer praise to Him with their lives, for his mercy endures forever.”

The Pope concluded the letter entrusting the Cardinal to the protection of the Blessed Virgin Mary and Blessed Pius IX, who was Pope when the Association was formed.

Pope Francis had met with members of the Pro Petri Sede Association on 24 February 2020 for an in-person audience in the Vatican, just ahead of the outbreak of the Covid-19 pandemic.

At that audience, he encouraged them to continue their good works, with which they “participate in the missionary action of the Church, which fights for the integral human development of every person.”

Pope to Mexico City Ecclesial Assembly: listen and be creative