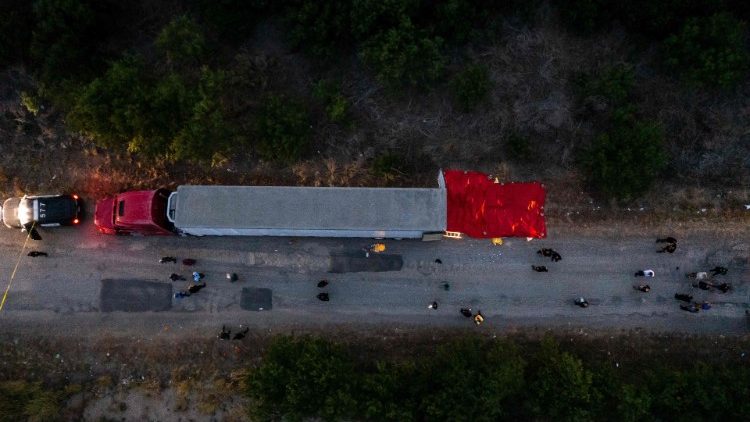 Pope Francis expresses his condolences to victims of a tragedy in San Antonio, Texas, in which 46 migrants were found dead in an abandoned lorry.

Pope Francis has expressed his closeness to victims in a tragedy that occurred on Monday in San Antonio, Texas, USA.

At least 46 people were found dead inside a lorry, in what appears to be a human smuggling attempt along the United States-Mexico border.

People fleeing poverty in Central and South America often undergo perilous and expensive journeys to try and cross the US-Mexico border, in hope of reaching a better life in the United States. Many die on these journeys, if they are not stopped, detained and sent back before arriving at their destination.

According to the San Antonio Fire Chief, Charles Hood, another 16 people – including 4 children – found in the trailer were transported to hospital in critical condition and are being treated for exhaustion and heat stroke.

The tragedy appears to have been the result of desperation and probably of the scorching heat that has been gripping the southern state, where temperatures have been over 39 degrees for days.

The vehicle with fake number plates was discovered by agents of Homeland Security Investigation next to railway tracks in a remote area on the city’s southern outskirts. Three people were taken into custody over the incident.

Pope Francis expressed his closeness to the victims of Monday’s tragedy through a tweet published on his account (@pontifex) on Tuesday.

“I sorrowfully heard the news of the tragedy of the #migrants in Texas and #Melilla. Let us #PrayTogether for these brothers and sisters who died following their hope of a better life; and for ourselves, may the Lord might open our hearts so these misfortunes never happen again.”