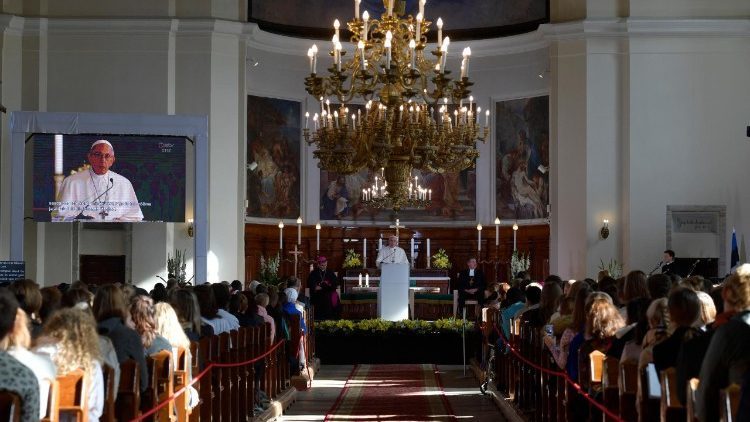 During his Apostolic Visit to Estonia on Tuesday, Pope Francis met with young people in an ecumenical gathering in the Lutheran Charles Church. He drew inspiration for his remarks from a painting in the apse of the Church bearing the verse from Matthew, “Come to me, all you who labour and are heavy laden, and I will give you rest” (Mt 11:28).

Young people can identify with Jesus

Pope Francis began his remarks by thanking three of the young people, Lisbel, Tauri and Mirko, who gave their testimonies. He then told the young people gathered that they could “identify with some of the things going on in the section of the Gospel” depicted in the painting. At this point, Jesus feels misunderstood and Matthew notes that Jesus is saddened by this (cf 11:20-24).

Frequently you too, as young people, can feel that the adults around you do not appreciate your hopes and desires; sometimes, when they see you very happy, they get suspicious; and if they see you anxious about something, they downplay it, the Pope said.

Companions along the way

The Pope then referred to the pre-Synodal process in which many young people “expressed the desire to have a companion along the way”.  He acknowledged that the institutional structures of the Christian churches

at times bring attitudes that make it easier for [adults] to talk, give advice, speak from our own experience, rather than listen, be challenged and learn from what you are experiencing.

Pope Francis quite openly admitted that adults need to be converted. It is because adults are often unwilling to change certain situations that young people consider them irrelevant. “In fact,” he said,

some of them expressly ask us to leave them alone, because they feel the Church’s presence as bothersome or even irritating.  They are upset by sexual and economic scandals that do not meet with clear condemnation, by our unpreparedness to really appreciate the lives and sensibilities of the young.

Jesus praised the Father because he was understood by the little ones, Pope Francis said.

Seeing all of you like this, gathered as one and singing together, I add my own voice to that of Jesus and I marvel that, for all our lack of witness, you continue to discover Jesus in our communities”, Pope Francis said to the young people gathered.

The Pope concluded referring to the words of a popular Estonian song, “Love is Dead”. This seems to be true when many young people see parents no longer loving each other, and feel that no one cares for them. Our common faith in Jesus, the Pope said, shows us that Jesus dwells and will be found on the fringes of society. Therefore,

Love is not dead. It calls us and sends us forth.  Let us ask for the apostolic strength to bring the Gospel to others and to resist the tendency to see our Christian life as if it were a museum of memories.