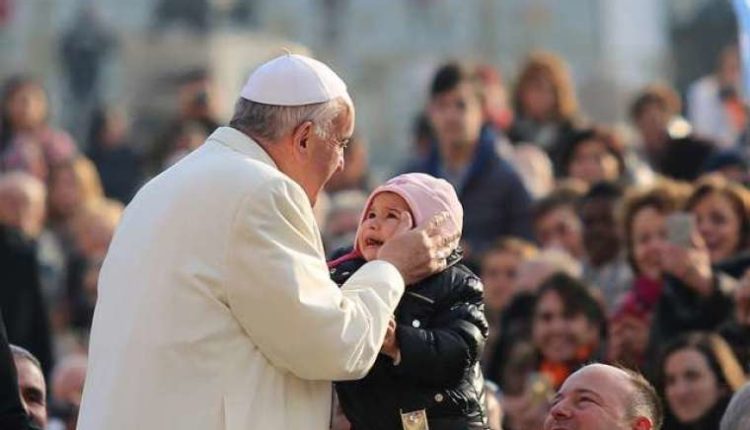 “We forget so many families – so many! – who lead their families, their children, with fidelity, asking for forgiveness when there are problems,” he said off-the-cuff. We forget because it is fashionable, often in magazines or newspapers, to talk about who is divorced from whom, and so on.

Pope Francis spoke about the family during his Aug. 29 general audience, in which he reflected on his trip to Ireland Aug. 25-26 for the World Meeting of Families.

The family meeting, he said, “was a prophetic, comforting experience of many families engaged in the Gospel way of marriage and family life; disciple and missionary families, ferment of goodness, holiness, justice and peace.”

Going off-script again, the pope noted that there is faith in Ireland, a faith “with great roots,” but there are few priests. The faith is failing there for many reasons, including the abuse scandals, and for this reason, he said, “we must pray for the Lord to send holy priests to Ireland, send new vocations.”

He invited those present to pray with him an “Ave Maria” to Our Lady of Knock for the intention, saying, “Lord Jesus, send us holy priests.”

He noted that his visit to Ireland, while a great joy, also contained some pain and bitterness, because of the various forms of abuse which have been committed in the country, even by members of the Church, and said his meeting with eight abuse survivors left a deep impression on him.

“On several occasions [during the trip] I asked the Lord for forgiveness for these sins, for the scandal and the sense of betrayal caused,” he stated.

The Irish bishops have taken a serious path of purification and reconciliation for these crimes, he continued, and explained that in his meeting with them he encouraged them to “inaugurate a season of renewal of the Church in Ireland.”

Francis said true points of light during his two days in Dublin were the testimonies he heard from married couples: “Their stories have reminded us that the love of marriage is a special gift from God, to be cultivated every day in the ‘domestic church’ that is the family.”

Other highlights of his visit were Saturday night’s Festival of Families in Dublin’s Croke stadium and the Mass on Sunday in Phoenix Park, he said. The testimonies he heard from different families on Saturday night were “very touching.”

He noted that during his pilgrimage Sunday morning to the Marian shrine at Knock, built on the site of an apparition of the Virgin Mary, “so dear to the Irish people,” Pope Francis “entrusted all families, particularly those of Ireland, to her maternal protection.”

About the trip overall, the pope said the “thousands of families – spouses, grandparents, children – gathered in Dublin, with all the variety of their languages, cultures and experiences, have been an eloquent sign of the beauty of God’s dream for the entire human family.”

“And we know it: God’s dream is unity, harmony and peace, in families and in the world, the fruit of fidelity, forgiveness and reconciliation that he has given us in Christ,” he sai

Pope Invites Waldensians And Methodists To Join In Serving The Poor