Pope Francis said Don Puglisi knew that the true danger in life is not taking risks, living in comfort and by half-measures. Choose love “Today we need men and women of love, not of honor; men and women who serve, not who oppress; men and women who walk together, who do not run after power.” Finally, Pope Francis invited Mafiosi to convert to the true God of Jesus Christ. “Change yourselves! Stop thinking of yourselves and your money,” he said. Rather, he implored the people of Palermo: “Choose love!” 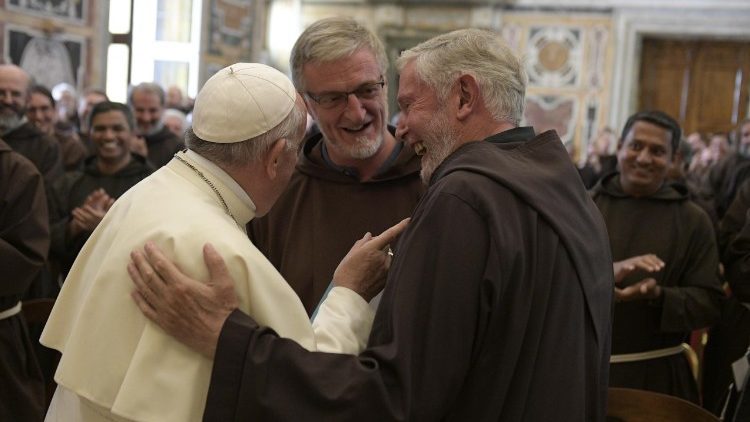 After welcoming the new General Minister, Br. Roberto Genuin, Pope Francis recognised some of the focal points of this year’s General Chapter. These include studying the theme “take my yoke… and learn from me”; and a document which “helps lead the consecrated person into the heart of the Gospel”.

In prepared remarks handed to the monks at the beginning of the meeting, Pope Francis urged the friars to push themselves “to live religious service and activities in gratuitousness, humility and meekness”. He explained that by doing so, they would be following the example of Saint Francis of Assisi. “In this way, with daily, concrete actions you will be able to bring to life the ‘smallness’ that characterizes Francis’ followers.”

“This is how the Lord acts:” said the Pope. “He does things simply. Humility and simplicity are God’s way of life.” This is the same way of life that Christians are called to assume in our lives and in our missions.

“The true greatness is to make yourself small, and serve”, said Pope Francis.

He asked that “with this ‘smallness’ in your hearts and way of life you bring your share into the Church’s efforts for evangelization”. This can be done, according to Pope Francis, “by generously bringing the apostolate into direct contact with different chapters – especially with the poor and the suffering.”

The joy of the Gospel as guide

Pope Francis encouraged the Capuchins not to lose hope when facing difficulties. “Let the joy of the gospel be the source of your strength and consistency.” he said.

“Our times manifest signs of obvious spiritual and moral distress due to the loss of secure and comforting references to faith.” said Pope Francis. Today, people feel the need to be accepted, listened to, and enlightened with love. He said that the Capuchins create connections with people through their relatable way of life – their “active participation in concrete problems, in spiritual conversation and in the administration of the Sacrament of Reconciliation.”

He urged them to “cultivate the robust spirituality that communicates to all the calling of the ‘things above’”. “This way”, Pope Francis said, “you will be more convincing”.

Pope Francis said that another important aspect of life in the Capuchin community is “union and communion”, which are fulfilled through dedicating time to listening and conversing, in order to “strengthen brotherly discernment”.

Pope Francis recognised the history of the Capuchin Order, “rich in numerous courageous witnesses to Christ and the Gospel – many of whom have been declared Saints and Blessed”. He concluded saying “the total consecration to God to the point of martyrdom, the simple life amongst people, sensitivity with regards to the poor, spiritual accompaniment as an approach and the humility that allows everyone to feel welcome.” This, Pope Francis said, is the Capuchin identity.

Pope: Ensure a better future for the people of Iraq, Syria

Young Salesians of Malawi, Zimbabwe and Zambia, prepare for Synod