Pope Francis in solidarity with the people of Ukraine 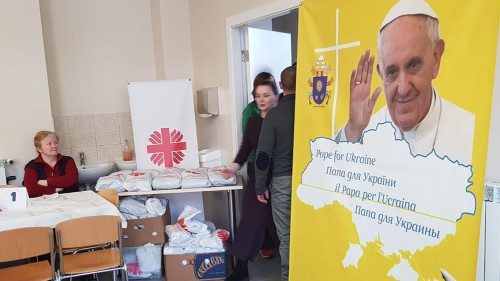 Almost 1 million people have personally felt the Pope’s “deep affection and solidarity” through the “Pope for Ukraine” project launched in June 2016.

Prayer and charity: these are the two arms Pope Francis has repeatedly extended from the beginning of his Pontificate to the “dear Ukrainian people”, especially to those afflicted by a 6-year war on the eastern border of the nation. On numerous occasions, Pope Francis has brought them to the world’s attention. The last time was at the end of last Sunday’s Angelus prayer. In that appeal, Pope Francis begged that a ceasefire implemented on Monday be respected so the Ukrainian people can enjoy a long-awaited peace.

His appeal comes just as the “Pope for Ukraine” project draws to a close. Pope Francis launched the “Pope for Ukraine” project in June 2016. The Dicastery for Promoting Integral Human Development has been supervising it. Just two years after the project launched, 16 million euros had been collected from all of Europe’s dioceses in addition to a personal donation from Pope Francis.

As of November 2018, thanks to the Pope’s project, almost 1 million people had been helped: heaters had been installed in family homes, children suffering from PTSD received services and cardiological exams at the “Kramatorsk City Hospital”, poverty-stricken people and the homeless could take refuge in a social centre created at a Church in Kharkiv and single mothers had been given a home in Korotych.

Through this project, “Pope Francis wished to show deep affection and solidarity with all Ukrainian people, and with those who suffer as a result of the protracted dramatic conditions caused by the war, without any distinction on the basis of religion, confession or ethnicity”. Thus, the project leaves behind a luminous trail of ecumenical cooperation and charity that will continue to aid people due to the concrete things that have been done.

In an interview with Vatican News, Msgr Eduard Kava, Auxiliary Bishop of Leopolis spoke with Gabriella Ceraso about the Pope’s benevolence to Ukraine and its people.

To date, Msgr Kava said that all the projects initiated through the “Pope for Ukraine” project have been completed. The only work that remains is that of “supplying machinery for a hospital dedicated to children”. It is the children, he said, who have paid the highest price in a conflict that continues to fester.

Reconstruction has also been one of the project’s goals. Msgr Kava says that “we have also done a lot in the reconstruction of houses to give people a semblance of normality.” He says that the situation “is not as tragic as it was 4-5 years ago. But it is clear that, for example, families with many children and elderly people who receive small pensions still need help the Church’s help.”

The “Pope for Ukraine” project had been implemented through the collaboration of the Apostolic Nunciature to Ukraine, and Technical Committees located in Zhaporizhia and Kyiv, as well as charitable organizations under the auspices of both the Roman Catholic and Greek-Catholic churches, and other Christian and international organizations. It has been “a beautiful sign of ecumenism”, remarks Msgr Kava, who describes how the work “was done truly together.”

“In this project, we all worked together…. We collaborated with the Protestants and with many international organizations. This was a sign of good ecumenism for us. You could say that this initiative of the Holy See was the only one where we all really worked together to help the population.”

Francis’s words, appeals and gestures of tenderness concretized through the “Pope for Ukraine” project are of “great help”, Msgr Kava emphasizes. Furthermore, “the whole process of solidarity” it initiated and the completed individual projects will continue to serve everyone.

“Even if the Pope’s project ends, the Church will in fact continue to give its help and stay close to the people, either through Caritas or through our parishes or through our volunteer organizations. There is not a lot of money but we are present and close.”

Caritas Ukraine offering assistance and hope in the Donbass region