Pope Francis: ‘I want to go to Ukraine, but at the right moment’ 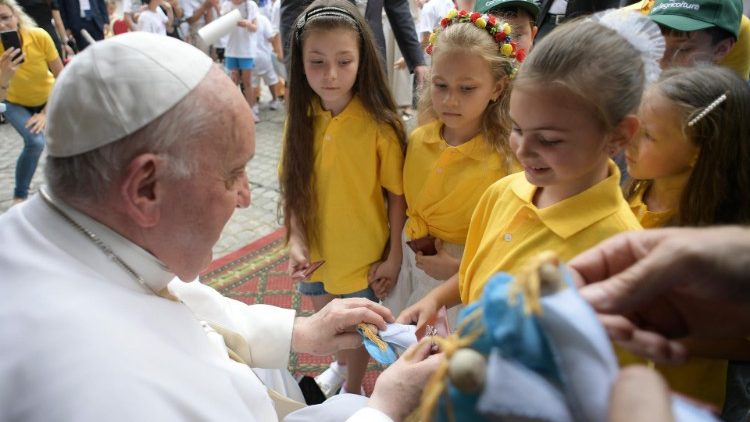 Pope Francis expresses his desire to go to Ukraine as soon as possible but says his visit must not do more harm than good. He was speaking to around 160 school children from Italy as part of the “Children’s Train” initiative.

Pope Francis has reiterated he wishes to visit the Ukrainian capital of Kyiv, but is waiting for the right time.

The Pope expressed this desire while to a Ukrainian child on Saturday who was one of some 160 children of various faiths from the outskirts of Italian cities. The group met with him as part of an initiative called the “Children’s Train.” Some of the children are refugees.

The initiative forms part of the “Courtyard of the Gentiles” programme of the Vatican’s Pontifical Council for Culture, in collaboration with the Italian state railways, and typically includes children who are not only Catholics but also Muslims, Buddhists, Orthodox, atheists and others.

This year marks the 8th edition of the “Children’s Train,” which was not possible during the pandemic.

‘I think a lot about the children in Ukraine’

In meeting the children, the Holy Father responded to their various questions, rather than delivering a prepared text.

Sachar, a child from Ukraine who left as a refugee and has found welcome in Rome, said, “I don’t have a question but rather a request: can you come to Ukraine to save all the children who are suffering there now?”

The Holy Father told Sachar, “I think a lot about children in Ukraine,” and for this reason, he noted, “I have sent some Cardinals to help there and be close to all the people, but above all, to the children.”

“[ I would like to go to Ukraine. But, I have to wait for the right time to do it, because it is not easy to make a decision that could do more harm to the whole world than good. I have to look for the right time to do it. This week I meet with representatives of the Ukrainian government, who are coming to talk about a possible visit of mine there. Let’s see what happens. ]”

Pope Francis has been invited by civil and Church authorities to visit Ukraine, and has said in the past, that it is on the table.

The Holy Father was asked what it is like to be Pope.

“The important thing, in any profession in which life puts you, is that you do not stop being you,” Pope Francis said, saying to always be yourself.

“So how do I feel as Pope? As a person, like each of you in your profession, in your work. Because I too am a person like you and if I have this job, I have to try to do it in the humblest way and more according to my personality, without trying to do things that are foreign to who I am.”

“Is it tiring to be Pope?” another child asked.

“God gives the strength to bear his own efforts” and we must carry it out “with honesty, sincerity and work,” the Holy Father said.

God always with us

During the questions, the Holy Father stressed how essential it is to remember God is with us, and that feeling protected by the Lord helps us.

“The worst thing,” he warned, “is when we don’t want to feel the Lord close,” and opt instead for distance.

“The secret is: to feel the Lord close,” he said. “And this accompanies you throughout your life.”