Pope Francis: Homily at the final Mass of the Synod – Full text

HOMILY OF HIS HOLINESS POPE FRANCIS 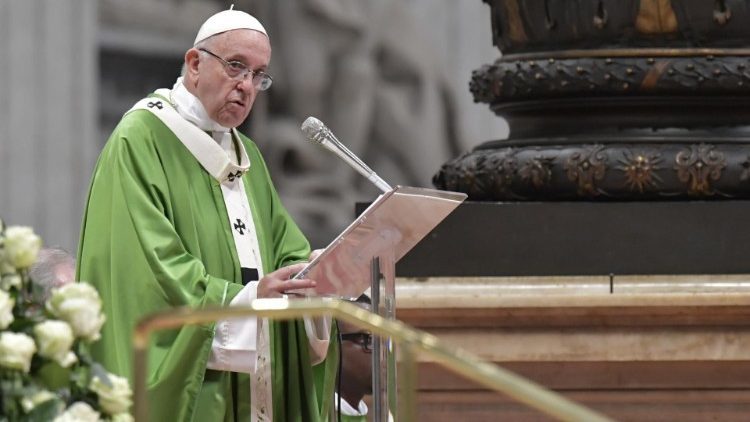 The account we have just heard is the last of those that the evangelist Mark relates about the itinerant ministry of Jesus, who is about to enter Jerusalem to die and to rise.  Bartimaeus is thus the last of those who follow Jesus along the way: from a beggar along the road to Jericho, he becomes a disciple who walks alongside the others on the way to Jerusalem.  We too have walked alongside one another; we have been a “synod”.  This Gospel seals three fundamental steps on the journey of faith.

First, let us consider Bartimaeus.  His name means “son of Timaeus”.  That is how the Gospel describes him: “Bartimaeus son of Timaeus” (Mk 10:46).  Yet, oddly, his father is nowhere to be found.  Bartimaeus lies alone on the roadside, far from home and fatherless.  He is not loved, but abandoned.  He is blind and has no one to listen to him.  Jesus hears his plea.  When he goes to him, he lets him speak.  It was not hard to guess what Bartimaeus wanted: clearly, a blind person wants to see or regain his sight.  But Jesus takes his time; he takes time to listen.  This is the first step in helping the journey of faith: listening.  It is the apostolate of the ear: listening before speaking.

Instead, many of those with Jesus ordered Bartimaeus to be quiet (cf. v. 48).  For such disciples, a person in need was a nuisance along the way, unexpected and unplanned.  They preferred their own timetable above that of the Master, their own talking over listening to others.  They were following Jesus, but they had their own plans in mind.  This is a risk constantly to guard against.  Yet, for Jesus, the cry of those pleading for help is not a nuisance but a challenge.  How important it is for us to listen to life!  The children of the heavenly Father are concerned with their brothers and sisters, not with useless chatter, but with the needs of their neighbours.  They listen patiently and lovingly, just as God does to us and to our prayers, however repetitive they may be.  God never grows tired; he is always happy when we seek him.  May we too ask for the grace of a heart that listens.  I would like to say to the young people, in the name of all of us adults: forgive us if often we have not listened to you, if, instead of opening our hearts, we have filled your ears.  As Christ’s Church, we want to listen to you with love, certain of two things: that your lives are precious in God’s eyes, because God is young and loves young people, and that your lives are precious in our eyes too, and indeed necessary for moving forward.

After listening, a second step on the journey of faith is to be a neighbour.  Let us look at Jesus: he does not delegate someone from the “large crowd” following him, but goes personally to meet Bartimaeus.  He asks him, “What do you want me to do for you?” (v. 51).  What do you want… –  Jesus is completely taken up with Bartimaeus; he does not try to sidestep him.  …me to do – not simply to speak, but to do something.  …for you – not according to my own preconceived ideas, but for you, in your particular situation.  That is how God operates.  He gets personally involved with preferential love for every person.  By his actions, he already communicates his message.  Faith thus flowers in life.

Faith passes through life.  When faith is concerned purely with doctrinal formulae, it risks speaking only to the head without touching the heart.  And when it is concerned with activity alone, it risks turning into mere moralizing and social work.  Faith, instead, is life: it is living in the love of God who has changed our lives.  We cannot choose between doctrine and activism.  We are called to carry out God’s work in God’s own way: in closeness, by cleaving to him, in communion with one another, alongside our brothers and sisters.  Closeness: that is the secret to communicating the heart of the faith, and not a secondary aspect.

Being a neighbour means bringing the newness of God into the lives of our brothers and sisters.  It serves as an antidote to the temptation of easy answers and fast fixes.  Let us ask ourselves whether, as Christians, we are capable of becoming neighbours, stepping out of our circles and embracing those who are not “one of us”, those whom God ardently seeks.  A temptation so often found in the Scriptures will always be there: the temptation to wash our hands.  That is what the crowd does in today’s Gospel.  It is what Cain did with Abel, and Pilate with Jesus: they washed their hands.  But we want to imitate Jesus and, like him, to dirty our hands.  He is the way (cf. Jn 14:6), who stopped on the road for Bartimaeus.  He is the light of the world (cf. Jn 9:5), who bent down to help a blind man.  Let us realize that the Lord has dirtied his hands for each one of us.  Let us look at the cross, start from there and remember that God became my neighbour in sin and death.  He became my neighbour: it all starts from there.  And when, out of love of him, we too become neighbours, we become bringers of new life.  Not teachers of everyone, not specialists in the sacred, but witnesses of the love that saves.

The third step is to bear witness.  Let us consider the disciples who, at Jesus’ request, called out to Bartimaeus.  They do not approach a beggar with a coin to shut him up, or to dispense advice.  They go in Jesus’ name.  Indeed, they only say three words to him, and all three are words of Jesus: “Take heart; get up, he is calling you” (v. 49).  Everywhere else in the Gospel, Jesus alone says, “Take heart”, for he alone “heartens” those who heed him.  In the Gospel, Jesus alone says, “Get up”, and heals in spirit and body.  Jesus alone calls, transforming the lives of those who follow him, helping raise up the fallen, bringing God’s light to the darkness of life.  So many children, so many young people, like Bartimaeus, are looking for light in their lives.  They are looking for true love.  And like Bartimaeus who in the midst of that large crowd called out to Jesus alone, they too seek life, but often find only empty promises and few people who really care.

It is not Christian to expect that our brothers and sisters who are seekers should have to knock on our doors; we ought to go out to them, bringing not ourselves but Jesus.  He sends us, like those disciples, to encourage others and to raise them up in his name.  He sends us forth to say to each person: “God is asking you to let yourself be loved by him”.  How often, instead of this liberating message of salvation, have we brought ourselves, our own “recipes” and “labels” into the Church!  How often, instead of making the Lord’s words our own, have we peddled our own ideas as his word!  How often do people feel the weight of our institutions more than the friendly presence of Jesus!  In these cases, we act more like an NGO, a state-controlled agency, and not the community of the saved who dwell in the joy of the Lord.

To listen, to be a neighbour, to bear witness.  The journey of faith in today’s Gospel ends in a beautiful and surprising way when Jesus says “Go; your faith has made you well” (v. 52).  Yet Bartimaeus had made no profession of faith or done any good work; he had only begged for mercy.  To feel oneself in need of salvation is the beginning of faith.  It is the direct path to encountering Jesus.  The faith that saved Bartimaeus did not have to do with his having clear ideas about God, but in his seeking him and longing to encounter him.  Faith has to do with encounter, not theory.  In encounter, Jesus passes by; in encounter, the heart of the Church beats.  Then, not our preaching, but our witness of life will prove effective.

To all of you who have taken part in this “journey together”, I say “thank you” for your witness.  We have worked in communion, with frankness and the desire to serve God’s people.  May the Lord bless our steps, so that we can listen to young people, be their neighbours, and bear witness before them to Jesus, the joy of our lives.

Synod of Bishops: Letter from the Synod Fathers to Young People