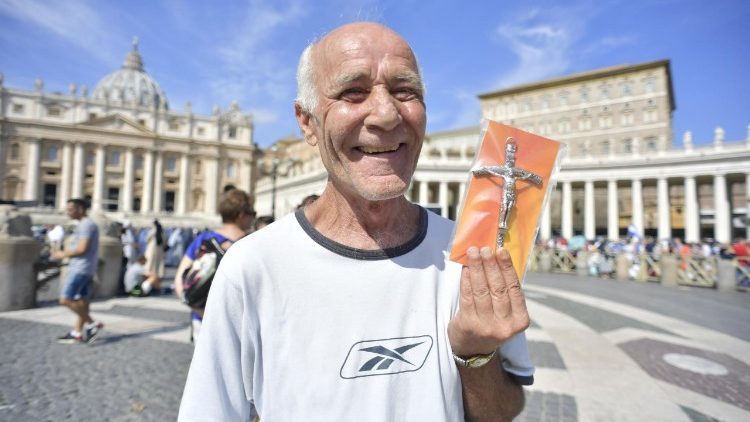 Pope Francis gave a crucifix to every person present at the Sunday Angelus prayer in St. Peter’s Square, to mark the Feast of the Exaltation of the Holy Cross celebrated on Friday, September 14th.

“Today, two days after the Feast of the Holy Cross, I thought of giving you who are here in the Square a crucifix,” the Pope said, in his remarks following the Angelus prayer.

Around 40,000 silver-plated metal crucifixes were distributed, along with a prayer card with the words (in English, Italian, and Spanish): “The Cross of Christ contains all the love of God; there we find his immeasurable mercy.” Pope Francis pronounced those words during the Way of the Cross held at the World Youth Day in Brazil on July 26, 2013.

“The crucifix is the sign of the love of God, who in Jesus gave his life for us,” he said before distribution. “I invite you to accept this gift and place it in your homes, in your children’s rooms, or that of your grandparents.”

Pope Francis pointed out that it is “not an ornamental object”. He said the crucifix is “a religious sign meant for contemplation and prayer.”

“Gazing upon Jesus Crucified, we gaze upon our salvation.”

The Holy Father thanked the sisters, poor people, and refugees who distributed the gift, which, he said, “is small but precious.”

Afterwards, the volunteers were offered a sandwich and a soft drink, which the Office of Papal Charities dispensed in Pope Francis’ name

Pope at Angelus: ‘Faith reduced to formulas is short-sighted’