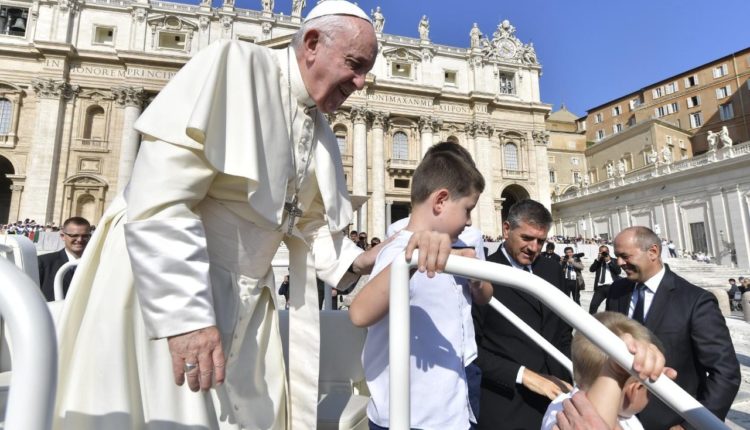 Pope Francis dedicated his Wednesday General Audience to a reflection on his Apostolic Visit to Ireland for the World Meeting of Families. “My presence” in Ireland, he said, “was intended above all to confirm Christian families in their vocation and mission.”

God’s dream for the family

He said the thousands of families that took part “were an eloquent sign of the beauty of God’s dream for the whole human family.” That dream, he continued, “is unity, harmony, and peace in families and in the world”; and he said that God is calling on families “to participate in this dream, and to make the world a home where no one is alone, no one is unwanted, no one is excluded.”

After expressing his gratitude to all those who made the event possible, Pope Francis spoke of the highlights of the Meeting, including the testimonies of married love by couples of all ages. “Their stories,” he said, reminded us that married love is a special gift of God, to be cultivated every day in the ‘domestic church’ which is the family.”

Responding to the abuse crisis

But despite the great joy of the journey, Pope Francis acknowledged the “sorrow and bitterness for the suffering caused [in Ireland] because of various kinds of abuse, even on the part of members of the Church,” and by the fact “that the ecclesiastical authorities in the past didn’t always know how to confront these crimes in an adequate manner.” He said he encouraged the nation’s Bishops “in their efforts to remedy the failings of the past with honesty and courage, trusting in the promises of the Lord and counting on the profound faith of the Irish people, in order to inaugurate a season of renewal in the Church in Ireland.”

Summing up the experience of his Journey, Pope Francis said “the World Meeting of Families in Dublin was a prophetic, comforting experience of so many families committed in the evangelical path of marriage and of family life; families of disciples and missionaries, leaven of goodness, of sanctity, of justice, and of peace.”