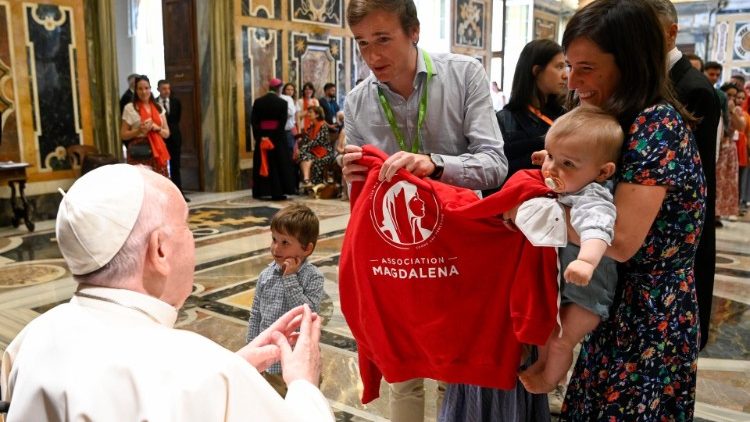 Pope Francis encourages members of the French social organization “Village of Francis” to continue embracing the Church “as a field hospital” and to look to Christ as their model.

Pope Francis stressed this when receiving inhabitants and participants of the Village de Francois in the Vatican on Saturday.

Addressing those gathered as ‘friends’ and saying he was happy to welcome them, the Pope admitted he initially had some doubts about the project.

“When Étienne Villemain [the Executive Director], “the enfant terrible,” who brought this project together with so many others, first told me about it, I could not help but tell him that I was wary of what the Holy Spirit might inspire in him… And now I am happy to see that the project is going ahead!”

According to its website, the Village de François develops and runs innovative shared living spaces, i.e. the ‘villages,’ in France, which bring together vulnerable people and those who care for them around three axes: living together; economic activity; and integral ecology.

The team behind the “Village de François” is composed of a team of social entrepreneurs, “green tech” company managers, association leaders, urban and landscape architects, and eco-builders.

Church as a ‘field hospital’

“The Village de François,” the Pope said, “is an ecclesial place that goes out of the usual framework” to propose something else.

“It is the Church as a ‘field hospital,’ concerned more with those who suffer than with defending its own interests, taking the risk of novelty, in order to be more faithful to the Gospel,” he said.

The definition of the world as a global “village” has become a commonplace; yet, he lamented that so many people “are left on the margins of this so-called village, reserved for a privileged elite.”

“I hope that the Village de François,” the Pope said, “will contribute to rediscovering what a true village is: a fabric of concrete human relations, in mutual support, in attention to those in need, in the coexistence of generations and in the concern to respect the Creation that surrounds us.”

The Village de François, the Pope observed, was imagined on the basis of the conviction that ‘everything is linked’, noting they have this “concrete experience of this by associating the environment and respect for human life from conception to natural death, prayer and fraternity, and also by bringing different generations together.”

“I count on your testimony to show that life according to the Gospel is found in the balanced consideration of all these aspects.”

The Pope warned against our tendency “to mobilise ourselves with great zeal for very legitimate causes,” but then lose sight of the bigger picture.

“Concrete experience however shows us,” he underscored, “that it is the human person as a whole that needs to be loved, accompanied and included in a network of enriching and constructive relationships.”

Jesus should be our model

The Pope went on to say such relationships have “an absolute model” and “a source” from which they can develop.

“You have settled in an ancient Trappist abbey: I see in this as a call for you to place at the centre of your experience, in addition to a simple and laborious life, the care and development of the inner life, of the relationship with Jesus Christ, Who alone can fill our thirsty hearts.”

When Jesus, in the Gospel according to St. John, says: “I am the Way, the Truth and the Life,” the Pope observed that Christ himself experienced, in first person, what they realise in the Village de François.

Jesus, the Holy Father pointed out, “was frail, in His mother’s arms and on the Cross; He worked as a craftsman; He lived in the rhythm of the seasons and of nature; He grew up in a village where generations mingled; He prayed, forgave and loved His neighbour.”

“To you, I entrust Him as a model and an inspiration in your project and your daily life.”

Pope Francis concluding by thanking them and reassuring them of his prayers on this “challenging, yet joyful and liberating journey.”