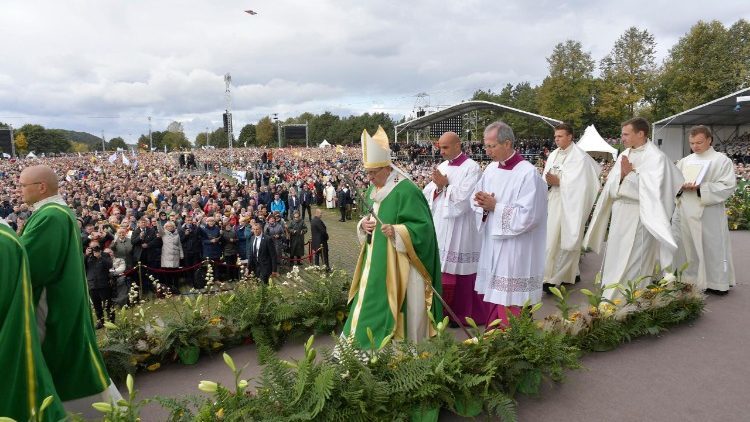 Pope Francis began the second day of his 25th Apostolic Journey to the Baltic States by celebrating Mass in Sàntakos Park, in Kaunas, Lithuania. His homily was inspired by the Gospel of the day from the liturgy of the XXV Sunday in Ordinary Time (Mk 9:30-37).

Jesus with his disciples

Jesus is at “at the halfway point of his journey to Jerusalem, Pope Francis began. Since he knows that the finale “would entail moments of trial and grief,” Jesus wants to prepare his disciples and “wanted them to renew their choice to follow him”, Pope Francis said.

Earlier generations still bear the scars of the period of the occupation, anguish at those who were deported, uncertainty about those who never returned, shame for those who were informers and traitors.

The First Reading (Wisdom 2:10-12), “speaks of the just who are persecuted…for their goodness”, Pope Francis continued.

How many of you can identify first hand, or in the history of some family member, with that passage which we just read?

the Pope asked. He then said that the people of Lithuania, who still shudder when they hear the word “Siberia”, can say with James in the Second Reading: “they covet, they murder…” (see 4:2)

Memories of the past

Seeking power, like the disciples did, “is the sign of those who fail to heal the memories of the past,” the Pope continued. Focusing only on those who were better, “who acted with greater dignity” in the past, denies that history, the Pope said. He called that past “glorious”, because it was filled with “sacrifice, hope and struggle with lives spent in service and fidelity to work”.

Jesus gives an antidote to remedy this “struggle for power” and the “rejection of the sacrifice”, Pope Francis explained. Jesus, the teacher, puts in their midst a “child who would earn a penny” doing what no one else wanted to do. “Who would Jesus place in our midst today, on this Sunday morning?” the Pope asked —the ethnic minorities, the unemployed, migrants, the elderly, the lonely, rootless young people?

The Church is called to place these people in the midst of the present-day disciples, Pope Francis said. Thus, no one can give the excuse that they haven’t seen them. Being on the move, going out, also means stopping at times, “to set aside our worries…to notice…to listen…to accompany those left on the side of the road”, the Pope said. Thus we learn, like the disciples did, “that in welcoming a little child, we welcome Jesus himself”.

Pope Francis concluded saying, that such a welcome allows Jesus “to heal our memory”, and “we make it known to all that Jesus Christ is our true hope”.