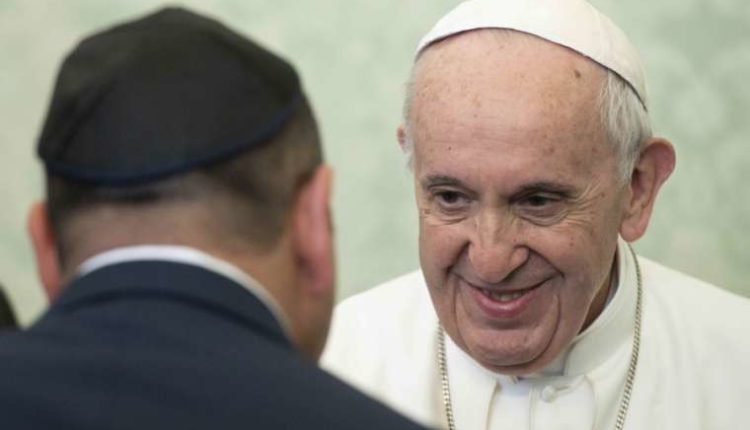 Pope Francis strongly condemned anti-Semitism, recalling the living memory of the Holocaust in Europe, during a meeting with rabbis at the Vatican Monday.

“As I have often repeated, a Christian cannot be an anti-Semite; we share the same roots,” Pope Francis told a delegation from the World Congress of Mountain Jews Nov. 5.

“Rather, we are called to commit ourselves to ensure anti-Semitism is banned from the human community,” he continued.

The Vatican audience was the first time that representatives of the Mountain Jews of the Caucasus, descendents of the ancient Persian Jewish community, met with a Roman pontiff.

“I have always sought to emphasize the importance of friendship between Jews and Catholics. It is based on a fraternity grounded in the history of salvation and it finds concrete expression in concern for one another,” Pope Francis said.

The pope recounted his visit with a Jewish community in Lithuania on “a day devoted to the commemoration of the Shoah, seventy-five years after the destruction of the Vilnius ghetto and the murder of thousands of Jews.”

“I prayed before the monument to the victims of the Holocaust and I asked the Most High to comfort his people,” the pope said.

There must be “a living memory” of the Holocaust, Francis insisted.

“Just a few days from now, Nov. 9 will mark the 80th anniversary of the Kristallnacht, when many Jewish places of worship were destroyed, not least with the intent of uprooting from the hearts of individuals and a people that which is absolutely inviolable: the presence of the Creator,” he continued.

In the wake of the deadliest attack on the Jewish community in the United States last week, many bishops spoke out against anti-Semitism. Eleven people were killed when a gunman opened fire at the Tree of Life synagogue during its Sabbath service Oct. 27.

“Anti-Jewish bigotry, and all religious and ethnic bigotry, is a terrible sin,” Bishop David Zubik of Pittsburgh said the day of the attack. “As we pray for peace in our communities and comfort for the grieving, we must put prayer into action by loving our neighbors and working to make ‘Never again!’ a reality.”

After the shooting, Archbishop Charles Chaput of Philadelphia said that “Religious and ethnic hatred is vile in any form, but the ugly record of the last century is a lesson in the special evil of anti-Semitism … It has no place in America, and especially in the hearts of Christians.”

Pope Francis offered prayers for the victims of the Pittsburgh synagogue shooting during his Angelus address.

“May the Lord help us to extinguish the outbreaks of hatred that develop in our societies,” he prayed.